The History and Heritage of Missouri Baptist University

When you stroll through our campus, it’s hard to believe that a little more than 50 years ago it was a small campus extension with a handful of students. Now, MBU is a flourishing Christian-based university with a growing enrollment, an expanding campus and a highly regarded faculty.

1960: The influence of students, Baptist leaders, pastors and laymen leads the Missouri Baptist Convention to approve the establishment of a Baptist college in St. Louis

1964: The first meeting of the Board of Trustees of Missouri Baptist College

1967: The groundbreaking of the original 81-acre site

1973: The first class of 29 students graduates with Bachelor of Arts degrees

1978: The school achieves its initial accreditation from the North Central Association under the leadership of the college’s third president, Dr. Robert Sutherland

The same year, the college doubled its housing capacity with the opening of North Hall.

2000: The University was approved to offer its first masters-level program, the Master of Science in Education. Today, the University offers seven graduate degree programs.

2002: Groundbreaking of Dale Williams Fine Arts Center, which prompts Dr. Lacey to famously say, “This building will stand as a reminder of those who came before, who laid the foundation of this whole enterprise, and it will point to the future with great hope and faith.”

2008: MBU began offering its first online degree program, The Master of Science in Education. Today, the University has 9 online programs and hundreds of classes.

2009: The University launched its first terminal degree program, the Doctor of Education.

2011: The University’s next chapter of residential living was unveiled with Spartan Village. Situated on the northern end of campus, the first phase of Spartan Village included the opening of The Carl and Deloris Petty Sports and Recreation Complex and modern apartment style living.

2011: Missouri Baptist University opens the Carl and Deloris Petty Sports and Recreation Complex, a state of the art, 47,000 square foot facility aimed at aiding learning and health and wellness.

2013: Phase II of Spartan Village was completed with the construction of a 4,500 square foot bookstore, an expanded and revamped dining hall and a community-focused resident living facility for more than 100 students.

MBU also begins offering an Ed.D. in higher education in fall 2015 as well as the new MBU Adult and Online division, which offers four undergraduate degree tracks entirely online at an affordable price for the busy working adult.

2016: MBU completes the final phase of Spartan Village with the completion of Spartan South, dorm-style buildings with a capacity of 80 students.

2017: President Lacey announces retirement, effective at the completion of the 2017-2018 school year, after 24 years of service to the University.

MBU receives initial approval from the Missouri Board of Nursing to begin offering a nursing degree in January 2018. 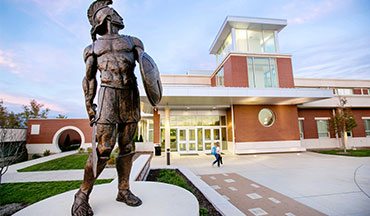 ST. LOUIS – Missouri Baptist University’s School of Nursing led all nursing programs in the St. Louis region with a 95% pass rate for the 2022 National Council Licensure Examination for Registered Nurses (NCLEX-RN). The NCLEX is the exam all … Learn More →

ST. LOUIS – The Missouri Baptist University Board of Trustees approved seven new academic offerings, several faculty appointments and the launch of a $12 million fundraising campaign at its regularly scheduled meeting, Oct. 20. The Board approved graduate certificates in … Learn More →

Missouri Baptist University Regional Learning Centers are here to help you find your stride and accomplish your goals. A journey at any MBU campus is the start to something better.

With classes near you starting every eight weeks, you can begin almost immediately. During your first class, you will quickly realize that our faculty are at the top of their field and eager to help you succeed.