The MBU Art Gallery will be showcasing the work of student Emily Rice for the month of November. A local artist and currently pursuing a B.A. in Theater at the University, Rice has developed her technique through classes, programs, internships, galleries and time spent in the studio. Rice also uses her talents in visual arts to design and construct sets and artistic pieces for various theater companies and productions. 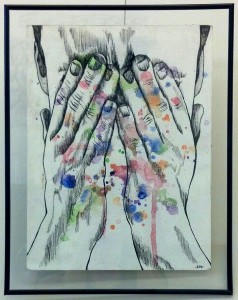 The purpose of the exhibition is to tell the stories that reveal God’s divine work in the lives of His people. The first cycle portrays stories from the Bible, as seen through hands. Each hand representing a different story reveals the characteristics of God in His kindness, strength, sovereignty, love and dominion. The remainder of the exhibit unfolds as Emily’s personal testimony of battles with her inner-self and experiences beyond her control.

The artwork will be showcased in the Pillsbury Chapel and Dale Williams Fine Arts Center in the Art Gallery through November.

The following story appeared in a 2013 issue of MBU Magazine:

The day of the accident, the sophomore musical theatre major had celebrated a successful run of “West Side Story” at MBU the prior weekend and was driving to her home in House Springs, Mo., before performing with a traveling choir in the area. The day was fairly ordinary.

When an F-150 collided into Emily’s Kia Rio, her ordinary day turned into a day of terror. Unconscious, Emily woke up to a scream, “I killed her.” Realizing she was not in heaven, Emily drifted back to a deep sleep only to awake to more chaos. Emily’s hip was crushed, causing excruciating pain as the Jaws of Life freed her body from her mangled car. As the pain drove her body into shock on the way to Mercy’s Emergency Department, she prayed and sang songs to Jesus. The paramedic with her advised her to keep singing, so she sang Chris Tomlin’s “I Will Rise” and Casting Crown’s “Praise You in This Storm” until her first surgery.

When Emily woke from her first surgery, she was surrounded by her fellow Harvester Church praise team members. With her parents on a choir trip to New York with one of her brothers, her church family stepped in to pray and support Emily during the critical and frightening first 24 hours. Her church family lifted Emily up in prayer while she coded four times in her hospital bed.

In the hospital, a surgeon told her, “You are lucky; you don’t know how lucky you are.” Emily did not understand what the surgeon meant until the trauma team informed her of the seriousness of her condition.

Pronounced dead on the scene, it was a miracle Emily was even alive. She broke 14 bones, including shattering her hip and fracturing her clavicle, three ribs and ankle. Because the engine of her car was pushed into Emily’s knees, she lost most of the feeling in her knees. Emily was told she may never walk normally again. If she wanted a chance to dance again, she would need further surgery.

Even after this conversation, Emily did not realize the gravity of her situation until she awoke from surgery with an 11-inch scar from hip to knee. When the pain sank in, her family and newfound MBU family was there for support. Friends, professors and fellow castmates from “West Side Story” visited Emily. They brought food and gifts and prayed over her throughout her stay at Mercy.

With Emily’s inner strength and support from her family and MBU community, she pushed through her physical therapy and occupational therapy, allowing her to return home before Christmas — once again, beating the doctors’ expectations.

While brushing her hair in a wheelchair on Christmas Eve, Emily realized that she could not recover on her own. Although she was strong, she needed support from friends and family. Emily was discouraged about losing her independence, but she kept faith for better days and stayed in constant prayer. Emily looked back from being dead on the scene to home by Christmas and realized that she is not a statistic. The next day, her physical therapists brought Emily a walker — a step toward independence and recovery.

These doubts were overcome when Emily realized she was saved from death for a reason.

“I’m not going to sit by and let the reason pass,” said Emily. “If I come back, walk, dance and be in the next show, it’s going to be a story.”

Emily’s doubts of returning to MBU were quickly proven to be unfounded. A day before classes resumed, Emily was released to use crutches, granting her more mobility for school. Instead of distant friends and hallway whispers, Emily found that the University was a dedicated support system. Her roommates, friends and the MBU community became a light in Emily’s life.

A transfer from two other local colleges, Emily had never experienced a strong and caring Christian community before and was used to being the lone Christian among her friends. At MBU, her friends prayed over her, professors encouraged her, and her faith in God continued to grow. As Emily’s heart healed, so did her body. On Feb. 14, Emily dropped her crutches and walked normally out of her doctor’s office. 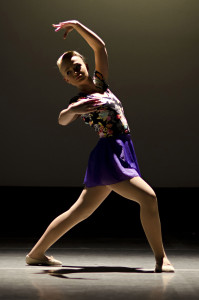 Emily previously told the theatre director, Joy Powell, that she would not be able to return for MBU’s rendition of “A Midsummer Night’s Dream” because she needed time to heal. Two days after being released to walk without crutches, Emily danced perfectly during her first dance rehearsal.

The remaining rehearsals were not all as easy, but her newfound family grew together and encouraged Emily to dance through the pain. With rehearsals, therapy and making up assignments from the previous semester, the spring semester was full of challenges. Her choir teacher encouraged Emily, telling her “Don’t give up,” when Emily needed strength.

Upon reflection, Emily is assured that transferring to Missouri Baptist University was a part of God’s plan for her, and one of the best things in her life. Her family and the MBU community were an essential light for Emily to regain her life, ability to dance and hope.

On March 21, the opening night of “A Midsummer Night’s Dream,” Emily celebrated her story of recovery with the cast. Tears of joy and gratitude streamed down her face, ruining her punk-fairy makeup. As the curtain call quickly approached, she fixed her stage makeup and proved she was a miracle with a plié and arabesque under the spotlight.