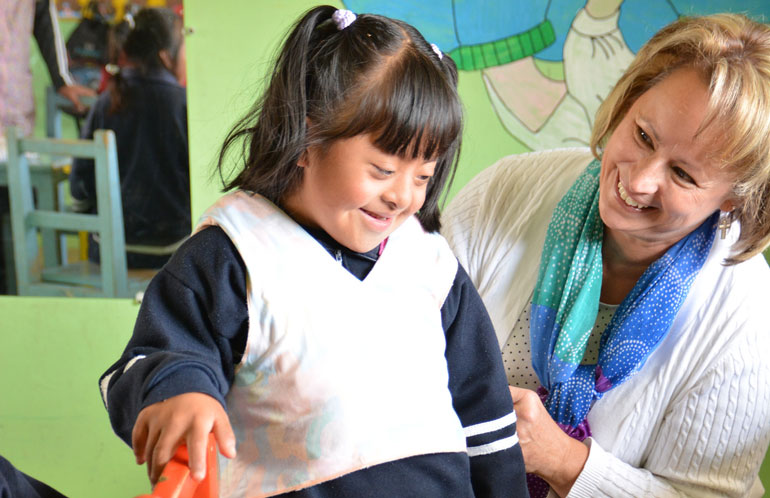 Offering an education through love.

Terri Lancaster will be the first to admit that starting an international foundation aimed at serving special needs students was not her original plan.

“I got into special education because my youngest son had severe learning disabilities,” said Lancaster.

The training she received to help her son inspired Lancaster to attend MBU and she earned her masters of education and special education certification in 2004. As a non-traditional student, Lancaster, who attended college at the age of 45, is grateful for the opportunity to receive the education needed to pursue her passions.

“I wasn’t sure when I started that I would even be able to go back to school, but MBU welcomed me and showed me that I could always learn and that I had something to contribute,” said Lancaster.

After a mission trip to Cayambe, Ecuador in 2014, Lancaster knew that contribution would be something so much greater.

“This degree gave me the confidence to think I had something to share with teachers in another country,” said Lancaster.

The name “Cotinga” was inspired by the diversely colored and sized South American bird of the same name. The foundation educates and equips special education teachers in developing countries by hosting free seminars and mentoring from practicing professionals.

“I was overwhelmed with how destitute and far behind their program is,” said Lancaster. “The teachers love and care for the students, but struggle with basic teaching techniques, and know almost nothing about special education.”

Through this foundation, Lancaster has been able to give the gift of education to students who otherwise, would not have had the chance.

“Special needs students in Ecuador are exactly like special education students in the United States.  All children want to learn and can learn,” said Lancaster. “It has been a privilege to show the teachers how to improve the student’s lives by what we are teaching.”

A story of Shining On.