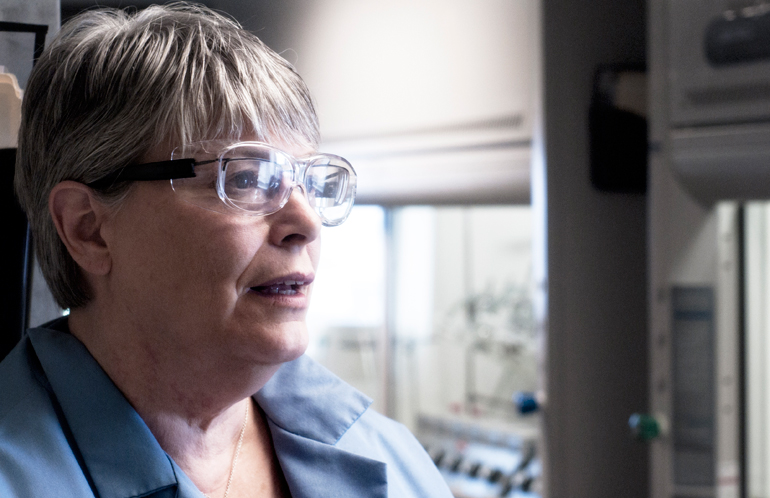 If you’ve never heard of Harristown, Ill., you’re not alone. With a population of 1,238, the farming community sits squarely in the middle of Illinois—and tens of thousands of acres of fertile farmland.

By most accounts, the rural piece of America is a sleepy little piece of what used to be—a place that typifies a simpler, slower time. And while that may largely be an accurate depiction of the town itself, it seems a lifetime away from the world-changing science occurring inside a former tractor dealership on the north side of town.

There, MBU Alumna Robin (McBride) King (’78), chief executive officer of EPL Bio Analytical Services, is leading a team of scientists who are playing a significant role in ensuring the safety of foods that have been genetically modified.

“My belief is that the technology we’ve been given in recent years can help to curb many of the problems of the world,” King said. “In the simplest of terms, we are working to make food safe in a way that doesn’t harm the environment.”

Proponents of GMO’s, including King, believe such bioengineered foods have tremendous potential to help stop the shortage of the global food supply—if done in a way that is not harmful to the consumer. King’s company tests genetically modified plant varieties to determine whether the nutritional value of the food is the same as its organic counterpart.

Through a process called Nutritional Compositional Equivalence, EPL examines essential nutrients in genetically modified foods, suchas proteins, carbohydrates, vitamins, minerals, fats and oils, to ensure that they fall within the normal range of variability for the food.

The testing of GMO’s that EPL conducts is a crucial component as the U.S. continues to increase its production of key crops, like corn, soy, rice and sorghum.

It’s a tremendous contribution that almost went unseen. On the verge of closing back in 2005, EPL hired King with one objective: to turnaround the struggling company. EPL, then down to seven employees, had already endured rounds of layoffs.

Today, the small business in Harristown employs more than 50 employees and continues to perform better year after year. The organization continues to pursue new initiatives and win contracts from large agricultural and biotechnology firms.

King has a long history of professional successes.

After earning a Bachelor of Arts in Medical Technology, King started her career working nights in the medical technology lab at a local hospital. Seven years later, she landed a job with St. Louis-based Monsanto, one of the largest biotechnology agriculture firms in the country. There, she worked on various teams during her 15-year stint, emerging as a proven leader in the area of assuring nutritional equivalence of GMO’s.

King’s time at Monsanto gave her the tools needed to spur recovery in small technical businesses that had bared the brunt of the recent recession. Before EPL, King successfully helped lead a turnaround in a then-struggling analytical agriculture organization in Union, Mo.

In part, her successes can be traced back to a work ethic cultivated at then-Missouri Baptist College. While at MBC, King worked full-time while completing her undergraduate work. Despite her non-traditional route, her experience as an undergraduate student helped her to think critically. Moreover, it was at MBC that King realized her Christian faith can empower her as a scientist to help people.

“Science strengthens my faith,” King said. “It helps to prove what I believe as a Christian. My time at Missouri Baptist helped strengthen that idea while providing me the tools to think critically in any situation.”