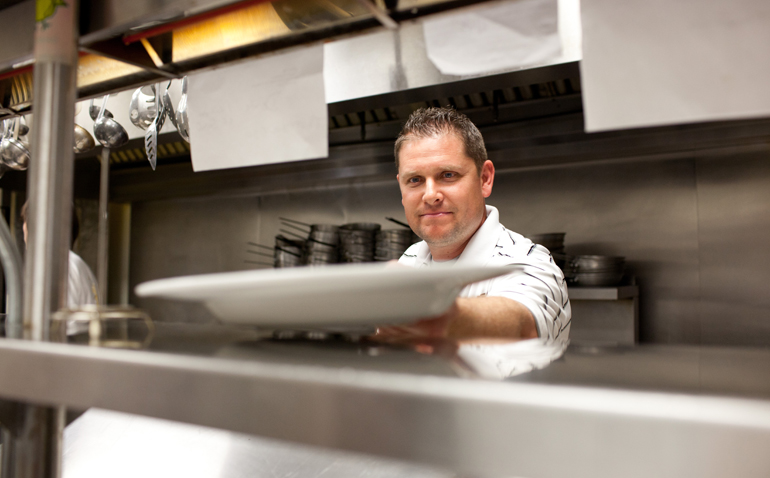 During the peak of the recession in 2007, Jeff Goddard was working in the mortgage banking industry. Like many in that profession, he was downsized from corporate America. Turns out, he wouldn’t have it any other way.

Goddard, a 1996 business administration graduate who was a standout soccer player, used his misfortune to pursue a lifelong dream of owning his own business. He took a risk of a lifetime and bought a restaurant during what has proven to be the crest of the worst economic downturn in decades. In January of 2008, Goddard took the reigns of Rizzo’s Italian Bar and Grill in Wentzville, Mo. “We are that local restaurant on Main Street that you grew up going to and you want to take your kids to when you come back,” Goddard said. “I want to recognize eight out of 10 faces.”

Rizzo’s dates back about 40 years when a couple of Italian immigrants from St. Louis’ Italian District, The Hill, decided to expand their business. While its time-tested recipes—from its signature spaghetti con polpette and chicken spedini—have not changed, its business practices have.

Goddard said experiences as a business student at MBU and his time working in corporate America provide a perspective that many restaurant owners simply don’t have. During the past three years, Goddard has made intentional efforts to run a more efficient business. He’s cut payroll to nearly a third of what it was before the acquisition. He’s also rolled out a successful marketing plan aimed at keeping regular customers happy while also attracting new
families.

All of that has taken place in a region that the U.S. Census has deemed the fastest-growing city in Missouri. With such growth comes increased competition. Today, Rizzo’s is surrounded by franchise after franchise.

He knows those businesses are competition. But Goddard, a husband and father of five children, says they only further emphasize the distinctly local flavor of his restaurant. “Yeah, there is a lot of competition and I am sure there will only be more,” he said. “But with my background and the history of this restaurant, I feel like Rizzo’s is really poised for success.”