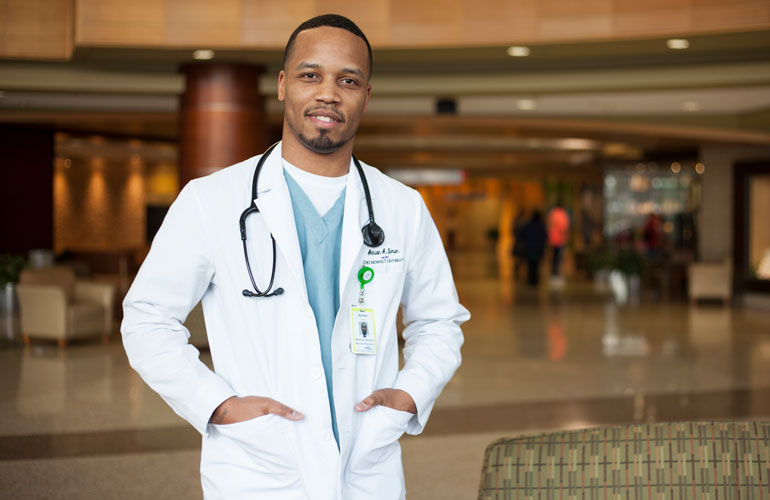 Christians are called to do all of their work, including academics and careers, with the utmost care to the glory of God.

Simien graduated from the medical school at Des Moines University on a full-ride scholarship. It’s a far cry from his childhood in gang-ridden Compton, Calif.

Growing up, Simien lacked any real guidance in school or life. His cousins were in gangs, and kids from his neighborhood were not expected to grow up to succeed—or even live to grow up due to gang violence.

Simien first came to MBU on a basketball scholarship, thinking he would eventually play overseas. After he met and married his wife, he found new determination. Simien thought that if he truly worked hard and with God’s favor, he could perhaps become
a physician’s assistant. One of his professors, Dr. Lydia Thebeau, disagreed.

“Simien had a natural zeal and commitment to become a doctor,” said Thebeau.
“He had many obstacles to overcome, but his dedication told another story.”

He could become a doctor.

“Medical school was never in my plans for the future,” said Simien. “While attending mbu, I was exposed to many areas. My advisors guided and assisted me with every curious question I had.”

The science faculty rallied around him, and Thebeau helped Simien become a technician at Mercy Medical Center. There he decided he was meant to become a doctor.  Determination and a strong support system propelled Simien to thrive in his studies and work, despite juggling full-time work, school and family.

Simien’s dedication to excellence led him to become sought after by medical schools as he continued his education.