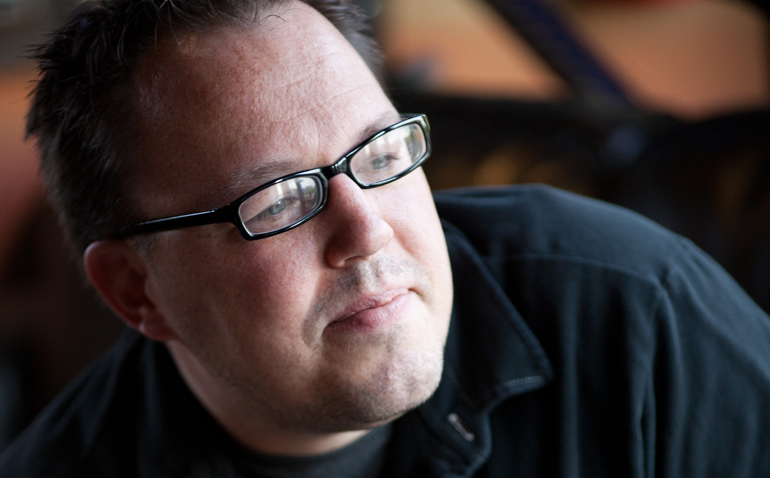 For Chris Conley, it can only be described as a “bread truck Monday.”

His grueling Sunday routine makes for a rather exhausting start to the week. Twenty-four hours earlier, an old van complete with 200,000 miles and trailer, which both stay in the Conley family driveway the other six days a week, rolled into Ballwin Elementary School just before 8 a.m. Conley and his troop of volunteers began to set up for church. Much of their sound equipment comes borrowed from local churches.

Besides set up and tear-down, as the lead pastor of a church that has been around for less than a year, Conley is responsible for all of the logistics that go into planning a Sunday service, not the least of which is delivering the sermon.

Add that schedule to the fact that attendance at yesterday’s worship was sparse, along with the seemingly unending list of other issues that have already surfaced this morning, and it’s easy to see why, on days like these, doing anything except planting a church seems attractive, even driving a bread truck.

Of course, it’s but a fleeting thought.

“I know that isn’t an option,” Conley said. “I have to press through and know that I am confident God has called our family to be leading Broadcast Church.”

After all, Conley knew what he was getting into when he set out to plant Broadcast Church, a sort of alternative to traditional church that Conley hopes will “be more effective at reaching the lost.” Broadcast is the sixth church Conley has had a part in launching since graduating from MBU in 1997 with dual majors in English and religious education.

It’s the first time, however, he has been the lead pastor of a new church.

“Really, we are very intentional that Broadcast will act as a sort of church planting hub,” Conley said. “We think the excitement and newness that comes with a new church has the potential to reach people who wouldn’t ordinarily go into a church.”

“Much of what these assessment tools measure are things like your likelihood to take risk and the
level in which you are resilient to opposition,” he added.

Being flexible also comes with the job. Many days, you’ll find Conley working from a high-top table in a local Ballwin coffeehouse. As a matter of fact, it’s where we are meeting today. It is the closest thing to what Conley can call an office.

Other aspects of church planting, particularly fundraising in a down economy, has also been challenging.

Conley has traveled the country developing a sizeable network of “investors.” He has found that asking financial supporters to help his church in modest terms, and provide him names of other potential givers, has proven successful. The church’s support system reaches from Florida to Colorado and beyond.

No matter what the challenge, Conley’s previous profession in business—not ministry—also has proved helpful.

“Probably some of the best preparation I had for doing what I do now was just working a ‘real job’ where I wasn’t on staff at a church,” said Conley, who was employed for more than three years as an area developer for a national restaurant franchise.

Developing strong mentors has been key, too.
“Ever since I was a punk student, I’ve had the privilege of calling Dr. Andy Chambers a mentor,” Conley said. “He has given me much advice and wisdom over the years and has been a direct mentor for this church plant.”

Ultimately, Conley is trusting that the varying facets of his current role will help change lives.

And that makes even the weariest of Mondays manageable.