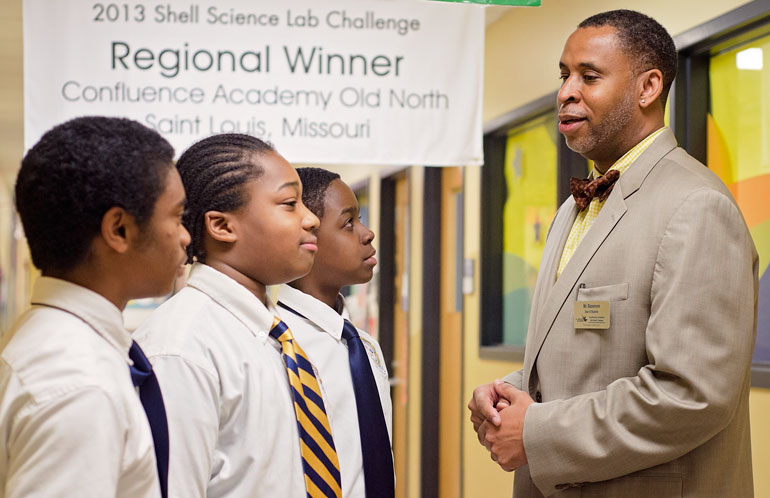 Seventh grader Anthony Cummings is a straight shooter. When asked why a mentorship program he is involved in is important to him, his reply was candid.

“I don’t have a dad at home,” he said. “I like being able to express how I feel and to talk with successful adults.”

Cummings is one of 20 or so middle school students who participate in the “Men of Influence” program in north St. Louis city.

It is a program founded and spearheaded by MBU alum Bert Bazemore, ’87, ’05. Bazemore, dean of students at Confluence Academy, is a lifelong educator who has worked in a range of school settings—from affluent private schools to inner-city schools like Confluence. Throughout his career, he has seen, time and time again, a link between a male student’s academic performance and future successes with whether or not that student has a strong male role model in his life.

“This is a program about empowering young men to see past their block,” Bazemore said. “We believe if we can connect students with outside professional men who can advise them in any number of areas, we can place them on a positive path for their future.”

Students selected to participate in the “Men
of Influence” program meet regularly after school with Bazemore and other leaders, from professional comedians and sports agents to leaders in law enforcement.

Bazemore started the program several years ago by choosing those students who were regularly getting in the most trouble. Since then, the organization has grown to include students who aren’t necessarily deemed at risk, as well. But the goal is still the same.

“It is paramount for these young men to have strong support from men who are modeling success by example, particularly when the
students may not have fatherly influence in
the home,” Bazemore said.

“If they aren’t exposed to success, their options become gangs, prison and sometimes death.”

While not always immediate, he is seeing positive outcomes from the program—one student at a time.

“I see light bulbs go on when the students are developing relationships with professionals whom they can relate with; these men came from the same situation but were able to work hard and become successful,” Bazemore said. “It shows them that, despite the disproportionate number of African American men who are incarcerated, they don’t have to be a statistic.”

Another way Bazemore helps his students “see past their block” is by enabling them to do something many of them have never done before—leave their city. He has raised thousands of dollars to pay for groups of students to go on trips to the National Civil Rights Museum in Memphis, Tenn., and the Negro Leagues Baseball Museum in Kansas City.

“My hope is that I can expand these students’ horizons,” Bazemore said. “Their futures are bright, and they need to know they are capable of accomplishing remarkable things in their lives.”