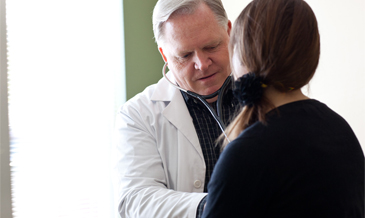 As a physician, MBU alum Aubra Houchin’s primary mission is to care for his patients, some of whom he has seen since birth. But as one of two partners in a private medical practice, Houchin, who sees about 20 patients a day, knows that the business side of being a joint owner of Christian Family Medicine in St. Peters, Mo., many times comes in a close second. Houchin, who graduated from Missouri Baptist with a bachelor’s in natural sciences before receiving a Doctor of Osteopathic Medicine, has been a partner at the family practice since 1988. Despite the decades that have passed since Houchin was a student, he says this institution played a fundamental role in helping him to become a physician with an unashamed Christian philosophy.

“Missouri Baptist was an important place for me because it built the foundation on which I’ve built my career,” said Houchin, who was MBU’s first graduate with a bachelor’s degree in natural science. “I had professors in the science division who were important role models to me.”

Since joining Christian Family Medicine, he and his partner have had their fair share of on-the-job training when it comes to running a business. Perhaps most notably, Houchin became wellversed on the ins and outs of eminent domain when the practice was forced out of its former facility in the name of economic development. Other more rudimentary parts of owning a business—from hiring and firing to the neverending pile of paperwork—are done in between seeing patients, Houchin said.

He’s seen a lot change during his more than two decades as an owner of a private practice, including the increasing rarity of practices like his. These days, the vast majority of practices are owned by hospitals or other large medical organizations. Government oversight has also increased. “The amount of government regulation, government oversight, and the inordinate amount of time that doctors and hospitals have to spend documenting just to stay out of problems have certainly increased,” Houchin said.

What hasn’t changed, at least in many cases, are the patients he sees. Houchin has seen many of his patients since he started with Christian Family Medicine. In fact, he’s now seeing babies of parents who he treated when they were babies.