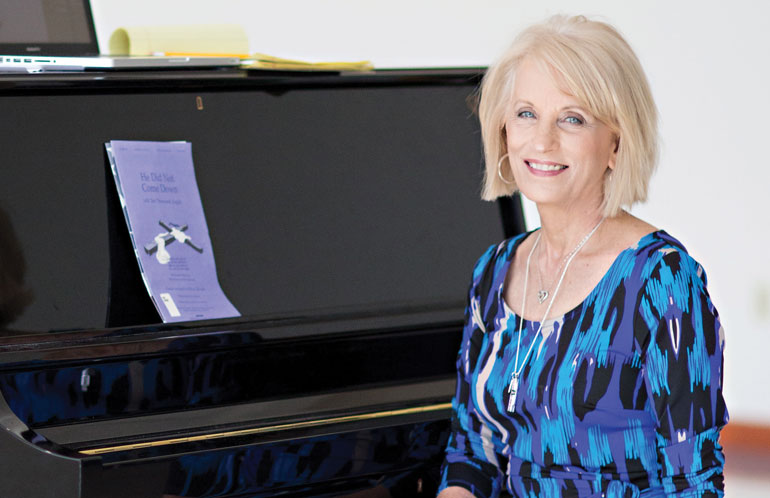 Sue Smith, ’79, will never forget how it felt to get her start.

“I would send a song off and not hear any-thing back, or I would get positive feedback but nothing would really materialize,” Smith recalled. “I finally got my first label cut and thought things were on the right track, only for everything to come to a screeching standstill.”

She credits her husband, John, with her breakthrough. Their family was returning from a family vacation in Florida when her husband pushed her to receive an invitation from well-known Nashville songwriter Dave Clark to spend a few days co-writing.

It proved to be the push she needed.

To date, Smith has received five Dove awards, the most prestigious accolade offered by the Gospel Music Association, for lyrics she has written. She has had cuts by Avalon, Jason Crabb, Sandi Patty, Travis Cottrell, Mark Harris, Michael English, Larnelle Harris, Karen Peck and New River, Janet Paschal, Charles Billingsley, Legacy V, Ernie Haase and Signature Sound, Brian Free and Assurance, The Hoppers, and many others.

Smith is currently a staff songwriter for Brentwood-Benson Music Publishing, Inc., in Nashville. As a lyricist, she doesn’t often hear about the influence her songs have had directly from listeners.

The few times she has, however, have been powerful. She remembers when someone forwarded a link to a video of a young man with Down Syndrome singing one of her songs. Then, there was the time when a man told her that her song was used during his brother-in-law’s memorial service.

“Those stories are so special to me,” she said.

They’re powerful testaments to powerful lyrics. Those lyrics may never have been recorded if it were not for someone who saw Smith’s potential. Clark not only proved to
give Smith the start she needed, but he’s been a close mentor and friend ever since.

“I have learned a lot from Dave about what it means to truly help someone else,” she said. “He believed in me, and much of my success is due to the role he took early on in my career.”

It’s that sort of mentorship role that Smith herself has developed with a multitude of new songwriters, many of whom live in St. Louis. In 2002, Smith launched “Write About Jesus,” an annual, three-day conference aimed at equipping and encouraging new songwriters. Since then, the conference has helped hundreds of budding Christian songwriters.

“It really has grown into an amazing opportunity,” Smith said. “I love the fact that even though ‘Write About Jesus’ is in St. Louis, it has become well known among writers, publishers and producers in Nashville.”

This spring, the seminar was named the 2014 Pacesetter at the Absolutely Gospel Awards.

Included in the conference is a contest that allows participants to have their songs critiqued by a variety of professionals in the Christian music industry. The winner receives a professional demo CD, along with an arranged meetings with publishers and writers in
Nashville.

Smith knows that such an opportunity can change a songwriter’s life.

After all, it did hers.