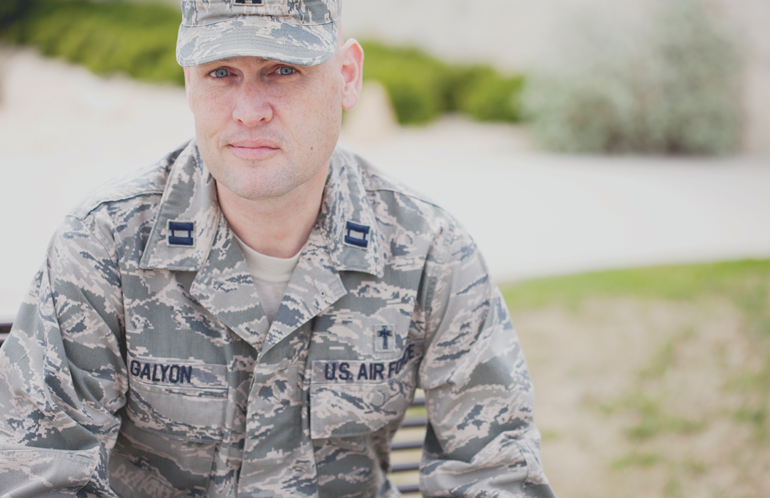 Dr. James Galyon, Captain and Chaplain in the U.S. Air Force, provides comfort and counsel to the Fort Hood, Texas community in the aftermath of last spring’s shooting at the U.S. military post—the second in five years there.

They called him “Animal” back in the day.

It was the late 80s then, and Missouri Baptist University was still a college.  “Animal,” known for his long hair and rambunctious personality, was always ready for an adventure.

He may not have known it then, but even back when a self-described “wild” James Galyon (AKA “Animal”) was an undergraduate student at then MBC, he was being molded for a calling that would daily influence peoples’ lives, many at their most vulnerable of times.

“Looking back, I’m glad that I’m no longer the carefree wild child that I was back then,” he recalled. “However, I’m very grateful to those who saw past the immaturity and recklessness, hoped for better things, and worked for my betterment.”

Today, Dr. Galyon, ’90, who earned a Bachelor of Arts in Religion from MBU, is a captain in the U.S. Air Force where he serves as a chaplain. He is currently assigned to Fort Hood in Killeen, Texas. Galyon, who holds a Ph.D. in theology and is working on his third master’s degree, received the 2009 Air Combat Command Company Grade Officer Chaplain of the Year Award. In 2010, he earned the Air Force Association Chaplain Corps Award.

His influence has perhaps never been felt more than in the aftermath of the April 2, 2014 shooting spree at Fort Hood—the second in five years there—where four people were killed and 16 injured.

“The recent shooting at Fort Hood left me emotionally depleted, quite honestly,” Galyon said. “I take it very personally when fellow military members are lost, especially in such a senseless manner as this. As people have come in for counseling, I’ve tried to help them pick up the pieces of their lives. The pain lingers, though hope is not lost. My prayer is that God’s grace and mercy will shine brightly during this dark period.”

As a chaplain, Galyon regularly helps ignite a light in those who are experiencing extreme darkness.

“I’ve dealt with the murder of an Airman, a fatal aircraft mishap, the deaths and injuries of Airmen and family members in vehicular accidents, and suicides, not to mention the two shooting sprees at Ft. Hood,” Galyon said. “Regardless of the location, my essential role is to provide support, encouragement, and a sense of direction.”

In his role, he is expected to be a leader, the foundation of which, he believes, is built on integrity and self-discipline.

“The resolve to act with integrity is paramount, especially in an age marked with selfishness and complacency,” Galyon said.

Galyon puts such traits to the test on a regular basis as a chaplain.

While perhaps not as widely known as their other responsibilities, military chaplains serve as the voices of conscience in the military. They are subject matter experts on ethics and charged with being defenders of human rights, working to ensure that military members, enemy combatants and civilians are protected from abuses.

Galyon points to the Abu Ghraib Prison Scandal in Iraq—where human rights violations against prisoners occurred—as an example to support the need for this chaplain role in the military.

“It is significant that even though military regulations required a chaplain at that facility, one was not assigned during its period of scandal,” he said.

Shortly after Galyon reported for duty at a new base a few years ago, a couple of senior members within a particular squadron questioned the need for a chaplain to be embedded in the unit. Over time, his persistence to influence the squadron through actions marked with integrity and discipline paid off. Looking back, Galyon can say with confidence that he has never been more part of a squadron than that one.

“When I left, they gave me a plaque on which was inscribed, ‘Your selfless dedication, commitment, and guidance will truly be missed. Even in the darkest times, your leadership and humor kept the squadron’s spirit up.’”

Ultimately, such leadership characteristics may never be more needed then when he provides counsel to members of the military. He is regularly entrusted with private information that may never have been shared before, or, for that matter, will ever be shared again. Per Air Force policy, chaplains, including Galyon, offer absolute confidentiality to military members who want to discuss personal matters—from legal problems to suicidal ideation.

It’s a sacred trust of sorts that forms between the chaplain and confider; it is something that Galyon believes helps members of the military deal with the multitude of pressures they face.

Despite the nature of the conversation, in the simplest of terms Galyon seeks to positively influence members of the military in times of suffering by helping individuals discover the inherent resources they possess to overcome a particular situation and, most importantly, instill hope.

“It’s important to remind ourselves and others that hope does not necessarily eradicate problems, but it does provide what is necessary in order to persevere,” he said. “I try to provide hope to people who are suffering by affirming the reality of their situations, minimizing that which detracts from a sense of optimism, and focusing upon how the present suffering is producing a future reality that contains positive expectation.

Ultimately, Galyon’s hope is that the members of the military he serves experience hope in Christ.

“The truth of the matter is that the greatest hope that people have is the fact that God is good, gracious and merciful, and that the Lord Jesus Christ has forever demonstrated that fact through His death, burial, resurrection and ascension,” he said.