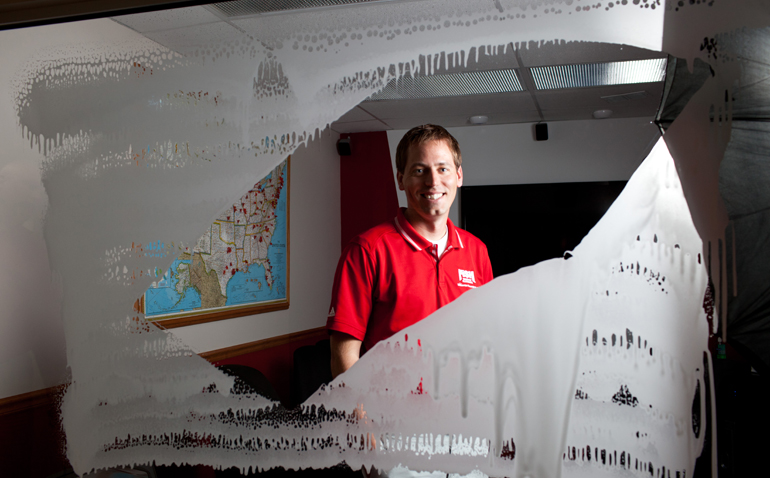 Over the years, Nathan Merrick has become an expert in the art of successful small business ownership. In fact, in some respects it is all he’s ever known.

As a child, Merrick, a 2003 alum who majored in business administration, remembers his dad searching for stability after getting laid off from a management position in the savings and loan industry. As the story goes, his out-of-work father asked the man
who regularly washed his company’s windows if he’d consider selling his business to him.

He did. Today, that company, Fish Window Cleaning, is one of the largest of its kind in the country. The company, headquartered in West
St. Louis County, has grown to more than 220 franchise territories in 40 states and provides service to more than 100,000 commercial and
residential customers nationwide.

Merrick works alongside his father, Mike, who is the CEO, and his mother, Linda, the executive vice president. His brother owns a
franchise. As vice president of franchise development, Merrick leads the expansion arm of the family business. It’s one they’ve built on a simple premise:
“Fish is committed to providing the resources and support, enabling franchise owners to be successful,” Merrick said. “We have a proven system of more than 30 years, and if they follow the system, we’re confident they will be successful.”

Merrick weekly leads webcasts with all of his franchise owners, and a team of nearly 15 employees who work from the company’s headquarters are charged with supporting franchise owners day in and day out.

There are also the perks. Fish owns vacation real estate in Florida and the Bahamas, both of which are regularly occupied by Fish franchise owners.

But before that happens, Merrick and his team thoroughly assess whether or not potential franchise owners have the capacity to be successful. He said that is a crucial component in his family business’ success.

The pool of those interested in owning a franchise has only expanded since the economy plummeted. “What we’ve seen is that all of those layoffs have provided a spike in qualified owners,” Merrick said.
Fish franchise owners come from a diverse background—from a Wall Street broker to an engineer—in 42 states.

Despite the company’s continued growth, Merrick said the family business, named after the Christian “ixthus” symbol, has not wavered in its mission. Its first philosophy statement is to honor God
and family, something Merrick says is more than just company rhetoric.
“We really believe that our business hinges on principles of honesty and integrity in everything we do, from sales to franchising our business.”