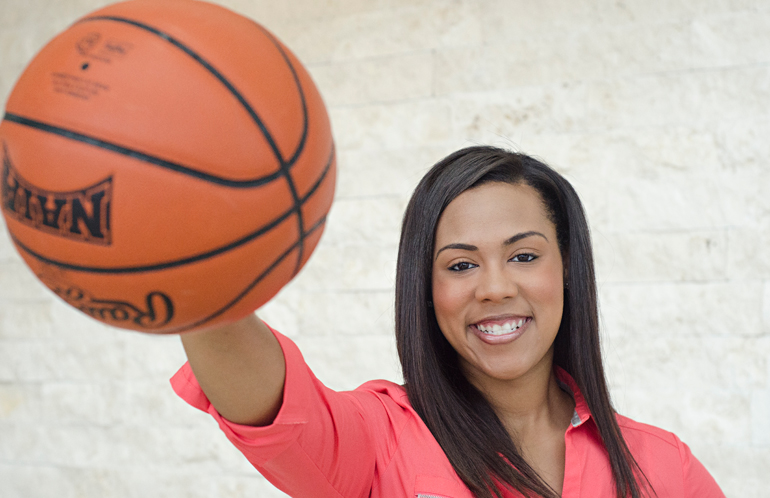 Khalia Collier, owner of the semi-pro basketball team STL Surge, is determined to bring female athletes to the forefront of St. Louis sports. The women’s semi-pro basketball team has been shaking up St. Louis athletics since Collier joined the Surge full time three years ago. Collier hopes to bring professional basketball to St. Louis, something that many wise and seasoned professionals have tried, but failed. She is accomplishing the impossible — and she’s only 26.

With Collier’s 5’10” athletic frame, it is no surprise that basketball is her sport of choice. At age 5, Collier discovered her passion for basketball at her local YMCA. With natural talent and determination, Collier’s skill outshined her fellow players. Collier dreamed of becoming a star athlete.

Recruited for Division I basketball, Collier later decided to transfer to MBU to play Spartan basketball. When an injury sidelined her from basketball, Collier submerged herself in the communications department. Through her classes and activities, Collier developed meaningful relationships with communication professors Paula Bennett and Ray Killebrew. “They pushed me to succeed, having every confidence that I would be successful,” said Collier. “Their support and wisdom is still crucial to my success.”

Working at a Fortune 500 company after graduation, Collier was well situated for a successful corporate career. One of Collier’s friends invited her to watch practices for a new semi-pro basketball team, the Surge. One day the team found out that Collier was a skilled player and asked her to play during practices. As Collier spent more time with the team, the owner quickly realized that Collier was an emerging business leader. This led to a jolting proposition: the owner wanted Collier to take over as owner of STL Surge.

Collier accepted. At 23 years old, she owned a sports team.

The team was struggling and at risk of becoming nothing more than history. The new owner was determined that would not happen — the Surge would succeed. After moving the team’s venue to University of Missouri – St. Louis, sportscaster Frank Cusumano featured the team in a newscast. At the next game, attendance soared. An average game attendance was 50 to 60 people. That night, attendance surpassed 650 fans.

In 2012, Collier faced a self-inflicted deadline. When she purchased the Surge a year prior, Collier promised herself that she would return to the corporate world after the 2012 season.

Leaving was too hard. “When the year was up, I couldn’t do it,” said Collier. “I eat, sleep and breathe the Surge.” The Surge was home, and Collier decided to stay.

Collier has seen her team flourish. Game attendance continues to climb. The players are top talent and even won the Women’s Blue-Chip Basketball League Championship for the 2014 season. Collier is hopeful her team’s recent successes are precursors to her ultimate goal: to make STL  Surge the first women’s professional basketball team in St. Louis.

A goal that is becoming closer to reality each season.