This summer, MBU senior Brad Buchanan trekked across the United States in effort to raise funds and awareness for young adults with cancer.

The Belleville, Ill., native completed the 4,500-mile trek—logging on average 90 miles a day raised more than $4,500 for the trip. Buchanan completed the trek with Ulman Cancer Fund for Young Adults, and 84 percent of the funds were directly given to the program. He rode in honor of a friend from his home church who lost her battle with cancer earlier this year.

“A cancer diagnosis between the ages of 15 and 39 is nearly eight times more common than such a diagnosis during the first 15 years of life,” Buchanan said. “So this is a group that is highly affected by cancer but is often overlooked.” Nearly 70,000 young adults are diagnosed with cancer in the United States each year. Today, cancer is the leading disease killer among 20- to 39-year-olds, according to the Ulman Cancer Fund for Young Adults. 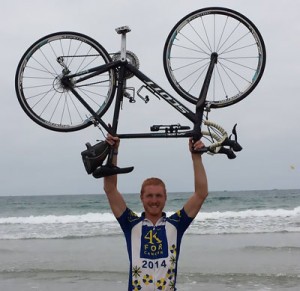 Buchanan celebrates completing his trek from Baltimore to San Diego.

Buchanan, who is a member of the University’s Institute for Leadership, strives to live out the principles of servant leadership—with this summer being no exception. “When servant leadership is done well, it is so powerful,” he said. “My hope is that the people that come in and out of my life see the scars of Christ in me and that my actions illustrate God’s love.”

His reliance on Christ—and his subsequent desire to lead through service—developed during his time at MBU. It was during his freshman year that Buchanan, a nationally ranked volleyball player who received a scholarship to play at MBU, came to realize that he was in need of something with sustained satisfaction. That realization has set him on a life journey to be Christ’s hands and feet. One that is certain to take a route all of its own this summer.

Buchanan, alongside 15 other cyclists, started his journey in Baltimore, Md., and is trekking through the southern United States before ending his journey 70 days later in San Diego, Calif. Along the way, Buchanan is staying in community centers, churches and other organizations—pretty much any place that will allow the group of cyclists to stay free of charge.

Even the food they eat along the way has to be donated. It’s another way for Buchanan and his team to make sure as much of the money they raised as possible goes to cancer research, he said. “It’s a little nerve racking to think about the idea of waking up and not knowing where my food will be coming from,” Buchanan admitted. It’s worth the worry, though, he added.

“I hope this opportunity allows me to be a light and to be able to share the Gospel,”
Buchanan said. “If I can share God’s love through this journey, then it will be worthwhile.”