“Spartan Sweethearts” are alumni couples that met and married as the result of attending Missouri Baptist University.  In February 2014, the Alumni Association conducted the second Spartan Sweethearts Contest; couples submitted their MBU Love Story for a chance to win two free drinks from thePerk and a $50 gift card to the restaurant of their choice. The 2014 winners, chosen at random, were Micah (’03) and Courtney (Britton, ’02) Mathis. Here is their story: 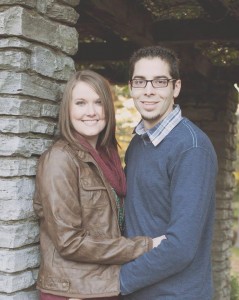 “I met Micah Mathis in 2000 when I transferred to MoBap. We were in Chamber Singers together. And in all honesty, I thought he was kind of a jerk that first year.

In the fall of 2001, we started a friendship through mutual friends, and with Micah’s new-found guitar skills and my piano/music major skills…we began to spend time making music together through various Disciple Now weekends and eventually both joined Rugged Cross Ministries. We were friends through the remainder of school and at MoBap’s 2003 homecoming, Micah asked me to go with him as a friend. I agreed and throughout that special night we began to see each other for more than just friends. One of the special events that night was that we and several friends went in on a limo ride together after the banquet. We rode all the way downtown to the STL Arch and took crazy pictures. It was a lot of fun and a genuine love began to develop between two wonderful friends.

In May of 2003, Micah and I went to two MoBap weddings in one day (in true form of Ring By Spring policy), and on the way back to Pillsbury-Huff, we had the DTR (define the relationship) talk. We decided at that moment we were officially a couple. In Nov. 2003 Micah planned to propose to me underneath the Arch (where pur love sparked) on my birthday. But the ring he designed was still not in. (We later found out it had been stolen). So he postponed to the day after my birthday. He serenaded me under the Arch with a song he wrote and we climbed all of the steps to stand under the Arch; he proposed with a ring on loan from the jeweler. I said yes! On June 12, 2004, we were married.

Here we are almost 10 years later: 2 beautiful daughters, 2 more sweet babies in Heaven, and in the process of adopting our 3rd child. Micah is in full time ministry pursuing Church Planting, and I am a stay-at-home mom who teaches private piano/voice lessons 1 day a week and sings/plays on the praise team at church. I am also the choir director at church. We are loving every minute of it. We couldn’t ask for a better story, because we fell in love with our best friend and we are still best friends.”