MBU began classes this week with the largest freshman class and the most main campus students in the University’s history.

The 2016-2017 full-time freshman class has increased by eight percent and the total of new main campus students has grown by four percent compared to last year’s enrollment. Furthermore, campus housing has reached capacity even with the addition of Spartan Village South, an 80-bed campus housing unit.

This year, 76 percent of freshmen live on campus–also the most ever–which is mostly credited to the University’s commitment to community-building through initiatives such as the addition of Spartan Village.  The unique living-learning community is now comprised of three new state-of-the-art housing units, all built within the past five years.

“The record-breaking gains in enrollment and housing are a result of strategic efforts to further create an environment in which students can develop academically, spiritually and socially as they find their place in the world,” said Dr. R. Alton Lacey, MBU president. “MBU offers a second-to-none education within a supportive community that allows students to find their strengths and develop the passion and skills necessary to be a light in their careers and communities.” 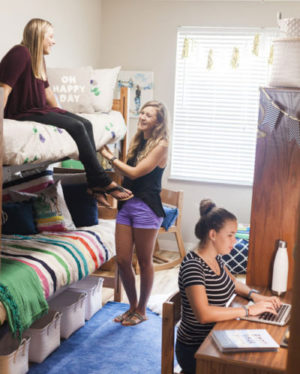 In addition, enrollment for the new undergraduate degrees of MBU’s Adult and Online division surpassed projections by nearly 20 percent. Missouri Baptist University announced last fall the new Adult and Online Program division geared at offering higher education in a way that meets the challenges of busy adult learners, particularly those who have started and stopped their pursuit for a college degree.

The statistics reported use enrollment as of the first week of school. Official data will be available after the October census.