Artist and Platinum-selling songwriter John Mark McMillan will appear in concert on Wednesday, Sept. 12 at Missouri Baptist University as part of the 17-city “Body + Ghost Tour,” with guests Mike Mains & the Branches and Tyson Motsenbocker.

McMillan first became known for his popular worship song “How He Loves.” He wrote the song in response to his best friend’s Stephen Coffey death in a car accident. The song was also performed and recorded by the David Crowder Band and nominated for a Dove Award in 2010.

McMillan maintains nearly half a million monthly listeners on Spotify and 40 million Spotify streams. His previous studio album “Borderland,” placed in the Top 15 on the iTunes albums chart and No. 41 on Billboard’s Top 200.

The tour will feature new music from “The Mercury Sessions,” his latest release in a two-part project launched from his full-length solo album “Mercury & Lightning.” The reimagined versions of his songs feature guest artists such as The Civil Wars’ Joy Williams as well as his wife, Sarah.

The concert will begin at 7 p.m. in the Pillsbury Chapel and Dale Williams Fine Arts Center on MBU’s main campus. 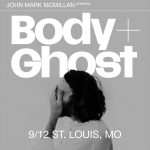