Posted on October 18, 2018 by Coral Christopher 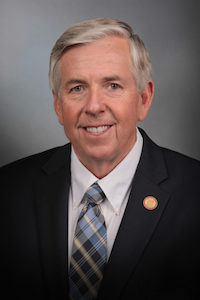 The free speaker series will take place in MBU’s Pillsbury Chapel from 11 a.m. to noon.

Michael L. Parson was sworn in as Missouri’s 57th Governor on June 1, 2018 by Missouri Supreme Court Judge Mary R. Russell. He came into the role of governor with a longtime commitment to serving others with over 30 years of experience in public service.

Amanda Staggenborg, MBU assistant professor of public relations and communications, is the coordinator of MBU Media Talk. The series was launched six years ago to further inspire students to achieve their dreams by showcasing professionals at the top of their fields.

“The Media Talk connects students with professional practice in all types of communication,” said Staggenborg. “This year’s theme is Christian communications. Governor Parson’s faith and values guide his leadership in Missouri and is an excellent role model for our students. I’m so proud to welcome him to Missouri Baptist University as our speaker.”