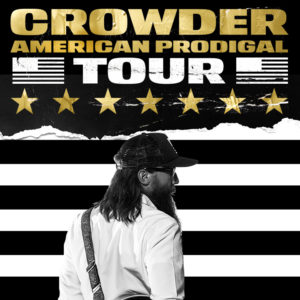 Grammy-nominated Christian band, Crowder will appear in concert on Friday, November 3 at Missouri Baptist University as part of his American Prodigal tour.

The show will begin at 7 p.m. in the Pillsbury Chapel and Dale Williams Fine Arts Center at MBU. Doors will open at 6:15 p.m. for General Admission, 6 p.m. for MBU students and 5:30 p.m. for VIP. The tour is to promote Crowder’s sophomore album American Prodigal, released in 2016, featuring the singles “Run Devil Run” and “Forgiven.” Crowder will appear with special guests Jimi Cravity and The Young Escape.

General admission tickets are $20 and MBU students can get two tickets at the discounted rate of $18 now on ticketfly.com.

Crowder released his first solo album in 2014, the Neon Steeple. The album featured the single, “I Am,” which peaked at No. 3 on the Billboard Christian Songs chart.