Posted on May 21, 2014 by Missouri Baptist University

The Class of 2014 was formally inducted into MBU’s Alumni Association amid traditional pomp and circumstance at the University’s 42nd annual Commencement Exercise April 29. The ceremony was held at the Family Arena in St. Charles, Mo., and was bookended by the University’s traditional bagpiper accompaniment.

Degrees were awarded to students in every one of the seven academic divisions including more than 40 majors at the undergraduate level, in addition to graduate and doctoral students.

David Smith, associate professor of mathematics, was named MBU’s 2014 Distinguished Professor at the commencement ceremony. The award is designed to recognize an exemplary professor who demonstrates outstanding teaching ability, dedication, and enthusiasm.

The recipient is announced annually at MBU’s commencement exercises and is awarded a $1,000 stipend. In addition to his role as an assistant professor, Smith has become an integral part of the University’s commitment to student success. Through the University’s Academic Success Center, Smith works one on one with students to help prepare them for success in the University’s Natural Sciences Division. 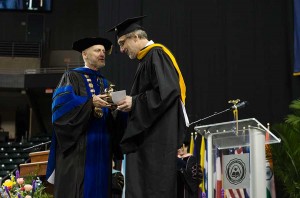 “David Smith invests in his students sacrificially and in a way that encourages true learning,” said Dr. Arlen Dykstra, MBU provost and senior vice president for academic affairs. Before his career at MBU, Smith worked for more than three decades as a middle and high school mathematics teacher in the public school district setting.

He received the Emerson Excellence in Teaching Award in 2013.