The evening was part of a year-long celebration surrounding the University’s 50th anniversary.

Missouri Baptist College was founded in the fall of 1964 on the campus of Tower Grove Baptist Church by St. Louis Baptists who had a vision for Christian higher education in St. Louis. Today, the legacy of Christian leadership and giving continues, allowing MBU to continue the vision of its founders — provide a higher education with unwavering Christian values and academic excellence. It’s a vision that marks the lives of MBU students and alumni as they serve in their communities, churches, industries and across the world. 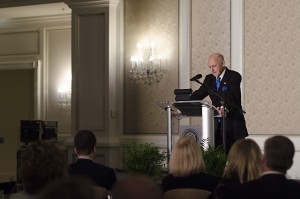 To continue the vision of Christian academic excellence, MBU unveiled the 50th Anniversary Campaign at the 50th celebration.  The campaign focuses on five goals:

In addition to the 50th anniversary, the 2014-2015 school year has been historic for MBU. MBU Football played its inaugural season in August, and the University broke ground for a football complex and practice field in September. New academic programs were launched including an exclusively online corporate security master’s degree, an undergraduate commercial voice degree. Leaders announced that MBU would begin to offer an Ed.D. in higher education to begin fall 2015. In March, MBU dedicated the Don and Mary Pillsbury Wainwright Performance Hall, located in the The Pillsbury Chapel and Dale Williams Fine Arts Center.