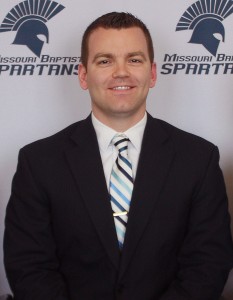 Brock will be no stranger to Missouri Baptist Basketball or the American Midwest Conference, having spent his last three seasons as an Assistant, and later, Associate Head Coach at Columbia College. While with the Cougars he coached under, and along-side, one of the most winning head coaches in the NAIA, Bob Burchard.

“I’ve learned a ton in the three years I’ve spent in Columbia,” said Coach Brock. “It’s definitely bittersweet to leave there, but there is definitely a winning culture and a high expectation (at Columbia) that we will try to carry over to our program.”

Brock was hired as a part of the Columbia College staff in the 2012-13 season, where he helped guide the Cougars to the Quarterfinals of the NAIA National Championship. The team received the top ranking in the NAIA for the first time in history and put together a record, 35 consecutive victories. Since his arrival in Columbia, he helped the Cougars to win 93 games with just 10 losses.

“Coach Brock has demonstrated a winning tradition throughout his career,” said Dr. Tom Smith, Director of Athletics. “Missouri Baptist’s rich history of success on the court is in good hands as a new era of Spartan Basketball begins today. It is not only an exciting day for our fans, but for the alumni and former basketball standouts that played for this institution and supported our teams over the years.”

Brock began coaching after a successful playing career at Truman State (Mo.). There, he served as team captain in 2005-06 and helped to lead the Bulldogs to an NCAA Division II Tournament appearance.

Prior to his time in Columbia, Brock spent one season as an assistant at Hannibal-LaGrange before heading to Pittsburg State (Kan.), where he spent four seasons from 2008-2012. While there, he helped to lead the Gorillas to the MIAA Championship Game in 2011-12.

“The AMC keeps getting better,” said Brock of the current basketball landscape of the conference. “You can tell from Freed-Hardeman and Lindenwood-Belleville playing in the (AMC) Tournament Championship this year that there are a lot of high-level teams. It is going to be tough and a challenge. I’m not sure that it is going to be an overnight deal, but we are going to work hard to find guys that want to work, compete, play on a championship team and work toward that goal on a daily basis.”

Knowledge of the current team and the AMC, recruiting in Missouri, and his contributions to the success of a strong NAIA program led to Brock’s selection.

“One of the things we did at a really high level for the last three years at Columbia is defend,” commented Coach Brock. “I think that is a mindset. From day one, we will need to find that identity as a defensive-minded team.”

Recruitment will begin immediately for Brock, as he will look to not only bring additional pieces to the Missouri Baptist lineup, but increase the name recognition around St. Louis of Missouri Baptist basketball.

“While we will take good players from wherever they are coming from, I think our base is here in St. Louis,” said Brock. “There are a lot of good high school coaches and players, so we will start there. Any team that has success at the levels we would like to have success at has a balanced team with both veteran and young guys.”

“Coach Goodwin will be a key factor in ensuring a smooth transition,” commented Smith about Goodwin.

Brock’s tenure will begin on April 1, where he will get started on the recruiting process for the 2015-16 team. His goal in the immediate future is simple, however.

“Our goal is for guys to work to get better every day, whether that is on the court, in the classroom, or just becoming more mature as men,” said Brock.

The Missouri Baptist University Department of Athletics supports 27 varsity athletics programs and five junior varsity sports. The University is a proud member of the National Association of Intercollegiate Athletics and is an NAIA Champions of Character Five-Star Award winner. Spartan Athletics also encompasses several non-NAIA teams to its credit.