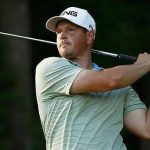 This weekend, Missouri Baptist University alum and pro golfer Chris Naegel will play in his first U.S. Open among leading golfers including Tiger Woods, Phil Mickelson and Dustin Johnson. The U.S. Open is one of the four main golf tournaments that take place in the United States.

Naegel attended Missouri Baptist University from 2003 to 2006. While at MBU, he was awarded the individual and a team title at the 2006 American Midwest Conference Men’s Golf Championship among other accolades.

Upon graduation from Missouri Baptist University, Naegel decided to pursue a professional career in golf. “When I was ready to graduate, I felt like I was only scratching the surface,” said Naegel as he described his decision to pursue a career in golf. “I figured, why not see where it takes me?”

Naegel has played numerous minor tournaments across the U.S., and has won two tournaments: the eGolf Tour’s Oldfield Open in 2012 and Adam’s Tour Buffalo Run Casino Classic in 2015.