MBU is ushering a new season in the life of the university with the addition of only the fourth collegiate football program in Saint Louis.

Matt Kliewer of Moberly, Mo., had been hearing rumors for months that Missouri Baptist University was getting close to launching football. It almost seemed too good to be true.

Attending a Christ-centered college in a major metropolitan area and within a couple hours from home were high on Kliewer’s college selection list. The prospect of attending such a place—while playing the sport he loves at the college level—was an opportunity he didn’t know he’d ever have.

For Kliewer, it was a game changer. 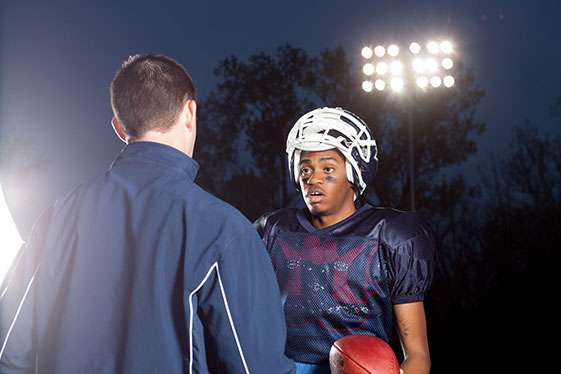 “It is an honor to play football at Missouri Baptist,” said the offensive lineman, who was the first student athlete to sign a letter of intent to play Spartan football. “To have the opportunity to pursue my college degree at a place like MBU and come into this program at the ground level is really exciting.”

Since then, dozens of student athletes have committed to be part of MBU’s new football program. A head coach has been hired. And, an almost palpable sense of excitement has overtaken MBU’s main campus.

“The addition of football provides significant opportunity for Missouri Baptist University to expand our distinct mission at a heightened level,” said Dr. R. Alton Lacey, MBU president. “We’ve entered into a season where our growing MBU community is eager to embrace Spartan football while celebrating the enhanced school spirit that is sure to follow.”

It’s a decision that has been carefully mapped out over the better part of a decade.
Years back, the University established a task force—comprised of faculty and staff—to determine the feasibility of adding football to its athletic program. 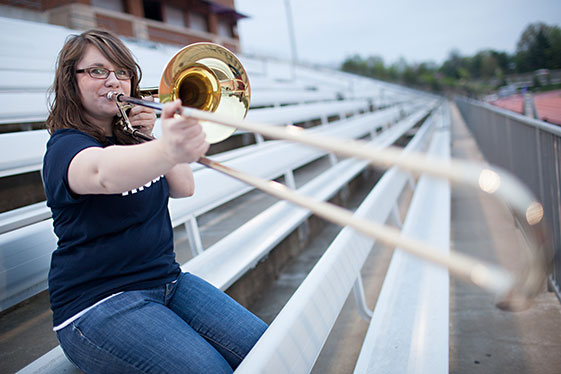 It was a tempting proposition. After all, collegiate football evokes distinct emotions and ideals—from brisk, fall games to the sense of school pride that comes with the thrill of a close victory—that epitomize the college experience for many.
Research quickly surfaced far more practical thoughts.

The conclusion was that MBU pretty much needed more of everything.

Ultimately, pragmatism trumped excitement, prompting the group to recommend that the University not pursue such a big move, at least not at that point.

“We had a really healthy debate,” recalled Terry Dale Cruse, vice president for enrollment services. “The University is committed to excellence and we ultimately came to the consensus that we would not be able to live up to such a standard considering the many intricacies involved in the launch of football.” 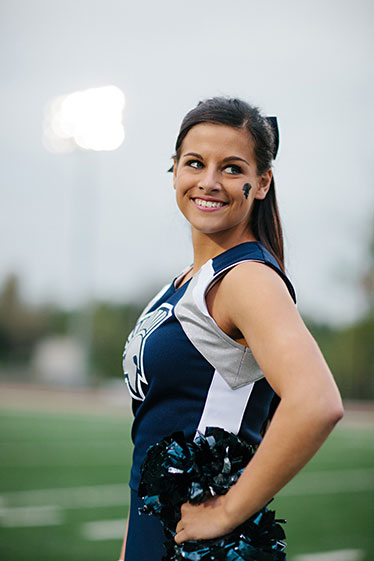 However, the thought of a Spartan football team never went away. Years went by, and the University saw strategic and sustained growth—in enrollment, academic offerings and by way of new facilities on its main campus. All the while, the University made intentional moves that, one day, would provide the impetus to launch Spartan football.

That football task force came together once again in 2011, and this time, after hefty research, their recommendation was much different.

“Though there are many challenges, there are also many benefits,” the task force concluded in their written recommendation to the Board of Trustees. “This is an opportunity to enable young men to further their education who might otherwise not do so, and to impact their lives for Christ by placing them in a Christian environment.”

This is the beginning of a new chapter.

MBU officially launched football on March 5 during a press conference held on the Creve Coeur campus. Plans are underway to scrimmage in the fall of 2013 with a recruitment class of about 30 student athletes. In 2014, the team will begin play in the NAIA.

With the addition, the University became the first and only NAIA institution to offer a football program in St. Louis, creating a clear opportunity for MBU to increase its mission in the area.

It’s an opportunity Jason Burianek has dreamt about for years. After a national search that yielded hundreds of applicants, MBU hired Burianek as head coach, in part because of his coaching philosophy.

“I believe that as coaches, it is our responsibility to mentor and develop young men to become successful citizens upon leaving our University,” Burianek said. “I plan to bring everything that I have learned to this position, along with a desire to work tirelessly to develop a program that the University and community can be proud of.” 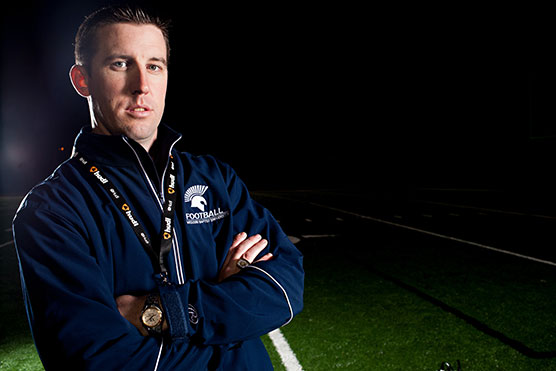 Burianek came with a wealth of playing experience, in addition to years spent as both a position coach and as a coordinator. He played college football as a wide receiver at the University of Colorado under Rich Neuheisel his freshman year and then under Gary Barnett for the remainder of his college career.

After graduation, Burianek spent a few months as a graduate assistant under Barnett, then joined the McKendree University coaching staff.

“It has been a dream of mine to be a college head football coach,” Burianek said. “I love coaching, but the real joy is watching young boys grow into men and go on to be successful. Knowing that I had a hand in molding these young men is what drives me in this business.”

“I think we really did our homework in the hiring process,” said Dr. Tom Smith, MBU director of athletics. “Jason is a Missouri Baptist kind of guy.”

Over the course of the next year and a half, MBU expects to recruit more than 100 new student athletes for football alone. That number increases significantly with plans to expand the current cheerleading program, along with the creation of a pep band and pom squad.

In order to meet the demands of such growth, the University is in the process of completing the second phase of Spartan Village, a residential neighborhood that will increase housing capacity by about 45 percent. Current on-campus housing is filled to capacity, and the new residence hall is expected to fill quickly, especially with the influx of new student athletes.

The newest component to Spartan Village is a 106-bed residential facility designed to be a step between the existing residence halls and the apartments built in Phase I.
Each bedroom will house two students, similar to the existing residence halls, but 16 students will share a suite equipped with a living room and kitchen, similar to the apartments.

“The second phase of Spartan Village will provide some of the most innovative on-campus housing in the area and will allow us to accommodate the influx of students expected from the addition of football,” said Taira Schertz, director of resident life.

“Our objective is that football will augment the resident life experience as a whole.”

In addition to new housing, the University’s dining hall is doubling in size, and will take over most of the second floor of the Field Academic Hall. 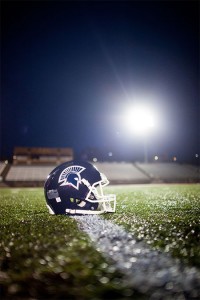 MBU has reached an agreement with neighboring Christian Brothers College High School to play all home games on their field.

The two schools currently share facilities on an ongoing basis, a relationship that has evolved over the years.

The SRC’s Fitness Center is a pioneering environment for exercise and wellness, featuring a range of innovative pieces of equipment including Virtual Active Technology.

The strength training machines, part of Matrix’s G7 Strength series, feature a low-profile design and are equipped with an electronic counter that tracks repetitions, activity time and rest time.

The old Muncy Gymnasium has been converted into an impressive training facility in its own right. Much of the gymnasium is now home to the University’s expansive weight room, featuring a breadth of Olympic-style free weights. 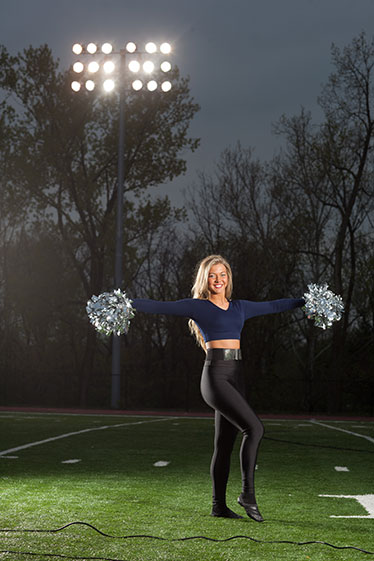 When you combine such changes, you have a University primed to launch a football program destined for success. Its benefits to the campus as a whole are expected to be many.

“The addition of football is certain to enhance the overall student experience at MBU for years to come,” said Dr. Andy Chambers, MBU senior vice president for student development. “As we grow and shift to more of a residential campus, we see football as an avenue to unite our students in Spartan spirit.”

Football, with all of its excitement, is sure to add vibrancy and higher morale to campus, Chambers added. It’s an excitement Keith Ross, ’87, senior vice president for university advancement, anticipates will catch on with the University’s more than 10,000 alumni.

“Football really changes everything. It provides our alumni and their families yet another way to support their alma mater,” Ross said. “Football presents a wonderful opportunity to engage the entire MBU community and connect the University’s rich history with our present and future.”

Beginning in 2014, Spartan football will be the cornerstone of homecoming festivities, providing an exciting atmosphere for alumni involvement, Ross said.

Ultimately, the University’s move to add football — and all that comes with it — can be attributed to a simple motive: a desire to continue to live out the University’s core purpose of teaching, empowering and inspiring students for service and lifelong learning.

“Attending MBU offers advantages not available at other universities,” Chambers said. “We want our students to flourish in the classroom and on the football field, and through all of this we want their lives to be transformed by the gospel of Jesus Christ.”

And that is the real game changer.