This year, nearly 400—a record-breaking number—MBU students call MBU’s West St. Louis County campus home. In the past five years alone, the University’s residential life options have expanded to include two phases of a residential life complex—Spartan Village. Cozy and contemporary apartments opened in 2011, and in 2013, MBU opened Spartan Row. Spartan Row is an innovative 106-bed complex features “pod” style living—complete with full kitchens and living rooms—where 16 students live in community with one another.

Though MBU’s Residential Life program continues to grow, the past ten years a familiar constant guides the students—Mama Schertz. 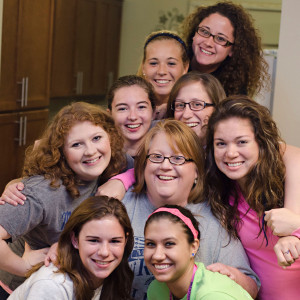 Mama Schertz and a few of her MBU children

Since 2005, MBU Resident Director Taira Schertz has been the resident mother to hundreds, if not thousands, of Missouri Baptist University students. As motherhood goes, it’s a 24-hour-a-day job. One that comes with the highest of highs and lowest of lows. She’s seen a countless number of young college romances turn into strong Christ-centered marriages. She’s spent nights by the hospital beds of sick students, trying to be the next best thing until moms and dads arrive to take over. She’s plunged overflowing toilets. And she’s witnessed students come to know Christ.

It’s a job that, indeed, comes with new stresses and celebrations everyday. One that the 39-year-old has made into much more than a job. To Mama Schertz, its life.  And a darn good one at that.

“It’s a calling that, at the end of the day, provides a type of fulfillment that most people will never get to experience,” said Schertz. “I feel blessed to be able to invest in these kids’ lives during such a pivotal time.”

That investment has been a family affair.

Schertz and her husband, Eric, ‘97, ‘07,, who works as a senior accountant at MBU, made the life-changing decision more than eight years ago to sell their Florissant, Mo., home and move their then three-year-old boy and baby girl into a girls’ residence hall.

“My friends thought I was absolutely crazy,” Schertz recalled. “To me, though, it seemed completely normal—almost as if I had been preparing my entire life for this opportunity.”

“She brought a sense of community to North Hall,” recalled Hessel. “The girls of
North Hall became part of the Schertz family, plain and simple. She knew how to be a mother, and that’s what she did. And she did it well.”

Over the past eight years, Taira and Eric have watched as their “real” children, which includes another boy born in 2008, have grown up with college kids. Countless numbers of students have gathered around the Schertz table for family-style dinners and, if they’re lucky, Mama’s gooey butter cake cookies, which have become a legacy in their own right around campus.

To the Schertz’s kiddos, with their signature red hair and bright blue eyes, the MBU campus is their neighborhood. It’s a place to ride their bikes and explore—something that the MBU community has grown accustomed to seeing around campus. It’s a place they are creating lasting childhood memories.

“Taira Schertz has invested her life and her family’s life in MBU,” said Dr. Andy Chambers, MBU senior vice president for student development. “Her selfless contribution to resident life at MBU can be plainly seen across campus, not to mention in the lives of countless numbers of current and past students.” Since Taira and her family moved to MBU back in 2005, she’s seen what was largely a commuter campus transformed into a residential community that offers some of the most innovative college housing around.  She’s also seen exponential growth in the number of students who live on campus.

“I feel like Mama’s influence on my life has helped shape who I am today,” said Victoria Underwood, an alumna resident assistant who has lived on campus all four years. “She’s been there as I have struggled and celebrated with me when I have succeeded.”