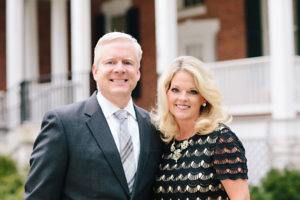 “I am deeply humbled and honored to lead MBU’s exceptional faculty and staff as we accomplish Kingdom work,” Ross said. “The vibrant Christian liberal arts mission of MBU occupies a unique position at the crossroads of faith and academic excellence. I look forward to extending that distinct mission as the University’s next president.”

The appointment comes following a national search conducted by the presidential search committee, which began its work in August.  Ross’ tenure will officially begin Jan. 10, 2018.

“The trustees believe there is no one more uniquely qualified to now lead MBU as president than Dr. Keith Ross,” said Dr. William Miller, chairman of MBU’s Board of Trustees. “His 25 years of Christian higher education leadership, along with his Christian commitment, academic pedigree and collaborative spirit, will serve the University well as it embraces its bright future.”

He will succeed Dr. Alton Lacey, the longest-standing MBU president, who will transition into the role of chancellor until his retirement in the summer of 2018.

“We are grateful for the 23 years of leadership Dr. Lacey has provided MBU,” Miller said. “He is a committed Christian, a visionary, a leader, and a friend to us all. The Board of Trustees expresses its deep appreciation for Dr. Lacey’s leadership and his legacy at Missouri Baptist University.”

Ross began his tenure at MBU in 1992. During his time at MBU, he has successfully led three major fundraising campaigns that have provided resources to further the University’s Christ-centered mission. As the chief enrollment officer, Dr. Ross has led the enrollment management team to execute a student recruitment plan that enrolls a balanced and diverse student body. Undergraduate enrollment on MBU’s main campus has increased 30 percent over the past decade culminating in the largest freshman class in University history in 2017. Recently, Dr. Ross was instrumental in launching both the University’s School of Nursing and its new adult and online programs.

In 1987, Dr. Ross earned a bachelor of arts in religion from MBU. He earned a master of arts in organizational leadership in 2008 from Regent University in Virginia Beach, Virginia. In 2014, he earned his doctorate of education in higher education leadership from Maryville University in St. Louis. In addition, Ross has completed postgraduate work at Harvard University’s Institute for Educational Management.

Dr. Ross and his wife Ginger have been married for 24 years, and they have one daughter, Madaline, who attends The University of Tulsa. The Rosses, both lifelong Missouri Baptists, are currently members of Fellowship of Wildwood in West St. Louis County.

“Ginger and I are honored to serve the University we love and where we have invested much of our lives,” Ross said. “We look forward to this new chapter.”