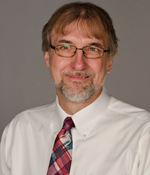 David Smith, associate professor of mathematics, is the recipient of the 2013 Emerson Excellence in Teaching Award.

Emerson, which has its world headquarters in St. Louis, has sponsored this program since 1989 as part of its commitment to promote quality education throughout the St. Louis area.

This is the only public recognition event of its kind in the state of Missouri.

Since Smith began teaching in Missouri Baptist University’s Natural Sciences Division, he has made a significant contribution to this university through his passion for both mathematics and the students he teaches.

“Not only is David Smith a brilliant mathematician, he is equally devoted to equipping the students he teaches,” said Dr. Arlen Dykstra, MBU provost and senior vice president for academic affairs. “He has committed his life’s work to helping his students reach their full potential.”

Smith’s impact at MBU is only part of his contribution to education in the St. Louis region.  For more than three decades, Smith worked as a middle and high school math instructor in several public school districts.  During his time teaching in public school districts, Smith regularlywent above and beyond his role in the classroom including acting as a sponsor of Fellowship of Christian Athletes.

In addition to his role as an assistant professor, Smith has become an integral part of the University’s commitment to student success. Through the University’s Academic Success Center, Smith works one on one with students to help prepare them for success in the University’s Natural Sciences Division.