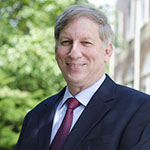 Biography
Originally from North Carolina, Dr. Deese attended North Carolina State University, pursuing an interest in aircraft design, receiving a Bachelor of Science in Aerospace Engineering, a Master of Science in Mechanical Engineering, and a Doctor of Philosophy in Mechanical Engineering. His Master’s and Ph.D. research topics were in the area of numerical modelling of Nuclear-Pumped Noble Gas Lasers, work funded by the NASA Langley Research Center.

In 1978, Dr. Deese came to St. Louis, MO, as a Research Scientist at the McDonnell Douglas Research Laboratories (MDRL). Originally a member of the MDRL Gasdynamics Laboratory from 1978 – 1980, Dr. Deese was responsible for the definition of arc heater flow field characteristics, including specification of test capabilities and investigation of flow phenomena in high pressure (up to 200 atmospheres), high temperature (up to 3000 F) arc jets.

As a member of the Advanced Flight Technologies Group at McDonnell Douglas Aerospace (1993 – 1996), and earlier as a member of the Flight Sciences Department of the McDonnell Douglas Research Laboratories (1980 – 1992), Dr. Deese was responsible for development and application of numerical methods for the prediction of the aerodynamic performance of aerospace vehicles. His major emphasis was on the development and application of solution techniques for the Euler and Navier-Stokes equations of fluid mechanics at speeds ranging from subsonic to hypersonic. Codes developed by Dr. Deese for these nonlinear partial differential equations are based on explicit time-stepping techniques and include models for turbulence and non-equilibrium chemical kinetic effects. Dr. Deese applied these codes to predict performance of fighter and transport aircraft, missiles, helicopters, and launch vehicles. Specific applications include analysis of advanced transport wings for the Douglas Aircraft MD-80, MD-11, MD-12, and C-17 aircraft, rotor and fuselage flowfields for the MD-500 and AH-64 Helicopters and launch vehicle flowfields for the McDonnell Douglas Delta programs.

Dr. Deese left McDonnell Douglas in 1996. Since that time, he has been a full time member of the faculty at Missouri Baptist University. He has taught a number of courses in mathematics and the sciences including: Intermediate Algebra, College Algebra, Probability & Statistics, Precalculus, Calculus I, Calculus II, Calculus III, Differential Equations, Linear Algebra, Numerical Analysis, Advanced Calculus I & II, Mathematics Seminar, Introduction to Physical Science, College Physics I & II, General Physics I & II, Physical Chemistry I & II, and The History of Mathematics. Dr. Deese became the Natural Sciences Division Chairman in 2003. He maintains an interest in nonlinear partial differential equations and their solution using numerical techniques.

While at Missouri Baptist, Dr. Deese served as a consultant to the Boeing Company, from 1997 to 2001. As a consultant with the Delta Programs in the Expendable Launch Systems Division of the Boeing Company, Dr. Deese performed computational fluid dynamics (CFD) analysis for Delta II, Delta III and Delta IV vehicles at various points in the flight envelope. Tasks included grid generation, primarily with the Boeing-developed code MACGS, generation of flow field solutions with OVERFLOW and the WIND codes, and analysis of results using the FAST post-processing software.

Outside of MBU, interests include travelling, particularly on mission trips. Dr. Deese has been a part of eighteen mission trips with the Global Outreach organization with the First Baptist Church of Ellisville/Fellowship of Wildwood. Fifteen of those trips have been to villages around Baia Mare, Romania, two have been to villages around Nakuru, Kenya, and one was to Florianopolis, Brazil. Activities in which Dr. Deese has participated on these trips include vision and medical clinics, evangelistic services, youth rallies, and Vacation Bible schools. Personally, Dr. Deese has been married to his wife, Gennene, since 1982, and has two daughters, Jennifer, who currently lives in Hollywood, CA, and Ashley, who lives in Richmond Heights, MO. 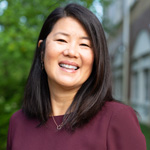 Biography
Mrs. Cochran joined MBU in the fall of 2000 as an adjunct mathematics instructor. She has transitioned into an Assistant Professor of Mathematics in 2018. She has taught various mathematics classes throughout the years, but she has focused primarily on Probability and Statistics. In 2019, Mrs. Cochran became the Director of EXCEL.

Mrs. Cochran earned a BS in Electrical Engineering at the University of Missouri – Rolla (Missouri S & T) and an MBA at Webster University. After graduation, she worked for 10 years in the engineering field with various roles such as process, project, manufacturing and quality engineer. She also worked for several years as an operations supervisor for a manufacturing department in the silicon industry. Personally, Mrs. Cochran is married to Tim and they have three grown children, Nicole, Noah and Emma. They live in O’Fallon, MO. Her interests include serving communities through local, domestic and international missions. She generally likes to stay active through hiking and walking. 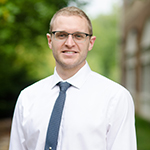 Biography
Dr. Duerr has had a career-long passion for science education and was blessed to join the faculty of MBU during the Fall of 2017. After graduating from Concordia University Wisconsin with a degree in Secondary Education/Biology, Dr. Duerr taught high school biology before continuing his education at Saint Louis University (SLU). While at SLU, Dr. Duerr developed an ongoing interest in the formation and metabolism of inflammatory lipids in diseases such as sepsis and heart disease. At MBU, Dr. Duerr strives to convey the importance of the biological sciences to his students, while also fostering an appreciation for the beauty of God’s creation from the largest of animals down to the simplest of organic molecules. Dr. Duerr enjoys spending time outdoors with his lovely wife Jasmine and his three children, Oliver, Hadley, and Benton. 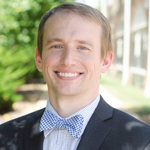 Biography:
Dr. Elvington joined MBU in the fall of 2015, beginning first in the Division of Health and Sports Sciences and transitioning into the Division of Natural Sciences in the fall of 2017. Dr. Elvington earned a BS in Microbiology at Clemson University, after which he completed his PhD in Biomedical Sciences, awarded with distinction, from the Medical University of South Carolina. His doctoral research focused on the role of an immune system pathway during injury and repair in an experimental model of stroke. Dr. Elvington conducted post-doctoral biomedical research in immunological and vascular mechanisms of cardiovascular disease at Washington University School of Medicine, a research collaboration that remains active. Dr. Elvington teaches courses related to the biomedical sciences, with an expertise in the areas of anatomy, physiology, immunology, microbiology, and neurological diseases. Personally, Dr. Elvington is married to Michelle and has two boys, Henry and Samuel, and currently lives in south Saint Louis County. Interests include (more) science, music, sports, and literature. 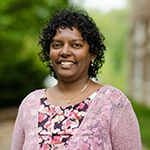 Biography:
Dr Schroeder began at MBU in Feb of 2012.  She has taught courses in mathematics, physics, physical sciences, geosciences and graduate education. Dr Schroeder has a specialty in Statistical Process Control and has done training for large and small companies all over the United States and Canada over the past 20 years. She has also served in numerous administrative positions at the college level during her career. Dr Schroeder’s husband is John and they live on the Lake of Egypt in southern Illinois. She has two daughters–the oldest, Carla, is an Electrical Engineer and has her twin grandsons and the youngest, Casey, is an Illinois State Trooper Lieutenant and has the two other grandsons and is expecting another baby early next year. Dr Schroeder is only a few courses shy of having a BS in Mining Engineering and began an MS in Geosciences. Her interests are in the geosciences and genealogy. 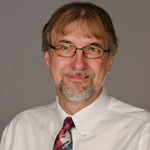 Biography:
Professor David Smith joined MBU as an Assistant Professor of Mathematics in 2009. Before that time, he served as an adjunct professor for ten years teaching at the MBU Troy-Wentzville Regional Learning Center. Prior to MBU, he taught 34 years within the Missouri education system, at Silex R-1, Elsberry R-2, and Troy R-3 schools. He has earned many awards including Optimist Club Teacher of the Year, Most Influential Teacher, MBU Distinguished Professor of the Year, and the Emerson Excellence in Teaching Award. Professor Smith received a BS in Math Education in 1975 and a MS in Mathematics in 1981, both from Illinois State University. David and his wife Sandy live in Troy, Missouri. They have two daughters and two granddaughters. Professor Smith’s interests include mathematics, long distance running, and playing guitar. 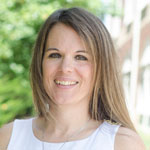 Biography:
Dr. Thebeau came to MBU in the fall of 2005 as an Assistant Professor of Biology. Dr. Thebeau earned a bachelor’s degree in Biology at Hannibal-LaGrange College and subsequently completed her PhD in Cell and Molecular Biology at Saint Louis University. Working in the division of Molecular Microbiology and Immunology, Dr. Thebeau’s doctoral research focused on the role of co-stimulation in T-cell activation and antibody class-switching in response to viral infection. Dr. Thebeau completed a short post-doctoral fellowship in the Division of Pulmonary and Critical Care Medicine at Washington University School of Medicine’s BJC Hospital before accepting her first academic appointment at Saint Louis University. Dr. Thebeau currently serves MBU full time as the Associate Vice President for Academic Affairs and Accreditation, while still teaching part-time in the Natural Sciences Division. Personally, Dr. Thebeau is married to Michael, and has three children: Rebekah (Bekah), Blake, and Bailey. Her interests include long distance running, watching her children’s sporting events, cheering for the St. Louis Cardinals, St. Louis Blues and Minnesota Vikings, and reading. 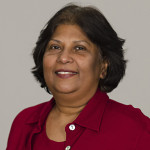 Biography:
Dr. Vedamuthu begin at Missouri Baptist University in the fall of 2004 after teaching for three years at Logan College of Chiropractic in St. Louis and one year at Texas Tech University. Dr. Vedamuthu was promoted to the position of Associate Professor in 2006 and to Full Professor in 2016. Dr. Vedamuthu earned a Ph.D. in Physical Chemistry from Texas Tech University in 1996. Her dissertation project investigated the anomalous characteristics of liquid water with a focus on the underlying issue of its structural forms. After completing graduate school, she served as a post-doctoral research associate at Eastern Illinois University, which was funded by Cabot Corporation, a global specialty chemicals and performance materials company. From 1999-2001, Dr. Vedamuthu served as a research chemist at Monsanto Headquarters optimizing the reaction conditions for the continuous production of glyphosate, popularly called “Roundup”. Personally, Dr. Vedamuthu loves getting to know my students outside of the classroom setting, listening to Indian music, watching movies, and volunteering at church. 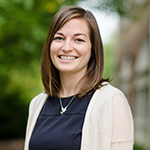 Biography:
Dr. Wahlman joined Missouri Baptist University Division of Natural Sciences in the fall of 2017. Dr. Wahlman earned a B.S. in Biology with a Biomedical Concentration and a minor in Music at Southwest Baptist University and then completed her Ph.D. in Pharmacology and Physiology, awarded with distinction, from Saint Louis University. Her doctoral and post-doctoral research focused on developing novel therapeutics for the treatment of chronic pain. Dr. Wahlman teaches biomedical sciences here at MBU including: Anatomy and Physiology, General Biology and Introduction to Biology. Personally, Dr. Wahlman is married to Ben and they have one son, Zeke. They live in South County where they are very active in their Church.

Biography:
Janelle joined MBU in the fall of 2016. She is an MBU alum and during her time as a student, she was a teaching assistant for various natural science labs. As lab manager, she works with both teaching assistants and faculty to offer the students the best lab experience possible. Personally, Janelle is married to James and they currently live in South County. Interests include reading, movies, and photography.