Located in the University’s Pillsbury Chapel and Dale Williams Fine Arts Center, the art gallery features work from students to local artists and beyond.

McAllister has a degree in painting from the University of Alabama and is currently studying counseling at Covenant Theological Seminary. Outside of school and work, he spends much of his time writing music and painting.
The idea that our stories hold great power connects all of his endeavors. McAllister’s music and paintings are explorations of memories— past joys and sorrows— seeking to better understand and honor the past so as to live more patiently and humbly in the present.

Scanio has a degree in art from the University of Missouri – St. Louis. His decades of experience include being a full-time and freelance illustrator, graphic designer and adjunct art professor.
In addition to working at Missouri Baptist University, Scanio is the part-time media “minister” at his home church. The two portrait drawings in this exhibit were commissioned for a recent edition of the MBU magazine.

Photography has long been one of Shaw’s passions. These photographs are some of his favorites from the early years as a photographer in St. Louis. This was a time when a photograph was envisioned, captured, developed and printed. Each one of those steps being an art form all its own.
Digital photography has certainly revolutionized the industry, but Shaw still misses the red glow of a darkroom light, the smell of opening a new box of paper and the wonder of watching your creation come to life in a tray of developer.

Sinamon has degrees from Southern Illinois University and Webster University and loves celebrating God’s creation through the medium of various art forms. Most of her time away from MBU is spent hugging on her son, little Leo, and exploring the world with her family.
For purchasing information, please contact Terri Adams.
Terri.Adams@mobap.edu
(314) 392-2387

Jeff Kapfer earned a BFA from Webster University with an emphasis in graphic design. He combines his graphic design influence with his childhood obsession of birds to create vibrant light-hearted paintings inspired by friends, family and everyday life. His work has been shown throughout Saint Louis including Houska Gallery, SIBA Gallery and the Saint Louis Art Fair in Clayton, Missouri.
For purchasing information, please contact artist.
Jeff Kapfer
JeffKapfer@gmail.com
(314) 578-6187
www.jeffkapfer.com

Jake Rosen has lived in St. Louis since he was just months old. Both his parents were Holocaust survivors and this biography is integrally connected to his painting. Soon after attending Art Students League of New York he came back to St. Louis and made
a radical decision – to believe in Jesus.

Since then, he married and with his wife Jeanne has invested in the Jewish believing community in St. Louis. They both earned MA’s in Inter Cultural Studies with a concentration in Judaica from Fuller Theological Seminary, CA. Jake Rosen also holds a BFA in
Painting from the Washington University School of Art

Recently, Rosen’s painted poetry “The Vision of Isaiah” has been shown, first in 2013 here at Missouri Baptist University, and later that year in New York City with Chosen People, and at the “Heart and Art” worship conference in early 2014. The Isaiah series
is Jake’s attempt to reflect the poetry of the Prophet Isaiah in paint.

The most recent installment in the Isaiah series Jake has completed, is before you in this show. “Mourning and Consolation”, is a nine panel painting that follows seven weeks of the Haftarah portions that are traditionally read in Jewish synagogues just before
Rosh Hashanah, the Jewish new year. It was displayed in 2017 at the Chapel, a music and art venue of Memorial Presbyterian Church across the street from Forest Park. The closing ceremony was a unique service held on Yom Hashoah of 2017.

Jake presently pastors Clayton Community Church and also a Messianic Congregation called Beit Chesed which meets on the second and fourth Shabbat of the month for morning service.

Coalier’s art is directly inspired by a history and love of textiles, coupled with a rich imagery of childhood fascinations and experiences. She grew up observing patterns and stitches on quilts. Her childhood wonder of the sea and sky influence her art. Coalier is drawn to both the poetic language, comfort and femininity of flowers, and the more rigid lines of manmade machines.  Her art gives these images a voice.

Audree feels God has blessed her with a love and ability for art from a young age. A lot of her inspiration comes from her mother, as she is a gifted artist as well. She did her first scratch art freshman year of high school and fell in love. She loves looking for details and trying to copy what she sees, especially with animals. She likes how unique scratch art is because instead of using a pencil, you use a knife.
For purchasing information, contact artist Audree Morecraft

Victoria says she is very fortunate that she has been blessed with the ability to create God-glorifying art. She has always looked up to her dad and her uncle when it comes to artwork. Her uncle is a graphic artist for Walsworth, and she has always looked to him for help when she couldn’t get something just right. She loves to do realist drawings so she can capture the raw beauty that God has given her subjects. She will work with any form of art media, but particularly loves to work with charcoal and pencil. She loves to watch as her artwork comes to life as she adds more and more layers of details to the piece.
For purchasing information, contact artist Victoria Van Doren 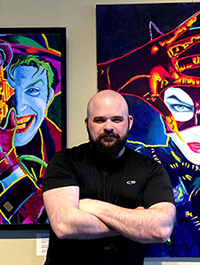 The Missouri Baptist University art gallery showcased the art of St. Louis native, Steven Walden during the month of September 2017. Walden started painting in 2014 and since then has gone on to great success, working locally and across the country, including Chicago, New York City and San Francisco.

Walden works extensively with charities since becoming a full-time artist. His works have helped raised nearly $100,000 in bids at various charity auctions and events. His work has been featured on local and national media news outlets, including Fox, MLB.com, sportsillustrated.com, KSDK, KMOV, KMOX sports radio, cardinals.com and blues.com. 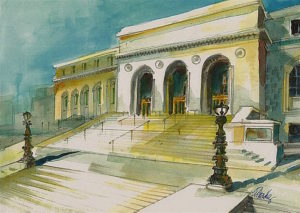 Marilynne Bradley’s work showcases vibrant colors and creative design inspired by locations in our very own, St. Louis, Missouri. Her works are completely watercolor which brings a unique view to the landmarks and scenes in which we are familiar. Bradley received the St. Louis Book Award from the Historical Society of St. Louis County at Missouri Baptist University and her work can be found showcased around campus.

Bradley has also been acknowledged in “Who’s Who in American Women Artists,” “World’s Who’s Who of Women,” and “Who’s Who in the World.” She is a signature artist member in the Southern Watercolor Society, Georgia WC Society, Kansas WC Society, Kentucky WC Society, and a distinguished member of the St. Louis Artists’ Guild. Her work is recognized in museum exhibitions, accepted in major national juried competitions and included in many major corporate collections in United States, France, Switzerland, Germany, Poland, Korea, Australia, Tahiti and China. She has had over 150 one-person exhibits and received over 50 awards.

Her paintings are also available for purchase upon contact with Marilynne at mgbrad@aol.com.

Doug Merkey works with wood to make masterpieces that give the viewer the allusion of other elements in nature. His work is detailed, beautifully crafted, and unique in its design. The featured gallery is entitled “The Color of Water.” The sculptures have rich shades of blue and green to transport the viewer to an ocean or lake scene.