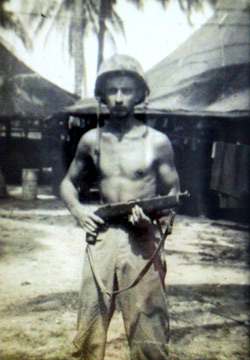 I recently watched Ken Burns excellent documentary about World War II called simply The War. I was most interested because my father was a United States Marine Corps infantryman from 1942-1945 and served in the Solomon Islands. As a boy I knew little about his service because he never talked about it. The only evidence I ever saw was his honorable discharge, his old khakis that he wore when he worked in the yard, and a green medical kit bag that my mother reworked for my use in the first grade. Had I understood what it represented I would have used it proudly instead of being embarrassed at being the only one without a cute hand sown generic bag like all the other kids. In recent years I have seen a few pictures from my dad’s service days and I have gotten him to talk about some of the places where he fought, most of which were mentioned in Burns’ documentary. His two closest buddies, now deceased, were occasional visitors during my younger years and I can remember some of their reminiscing. It was never about the fighting, but always some funny story about something that happened to one of them or how bad the food was or some famous person they saw. For example, my dad mentioned standing next to Admiral Bull Halsey, seeing Bob Hope, and meeting Ernie Pyle. In later years I learned that he was part of a group of Marines that were sent back to San Francisco in 1945 to prepare for the invasion of Japan. He was in the states when the first atomic bomb was dropped. After that he was sent to Pearl Harbor where he was stationed until he was discharged, despite the fact that he had more than enough points to have been discharged earlier. He loved the Marine Corps and credits the discipline he learned from his service with much of his success in life. However, like most men who served, he never talked about it. A few years ago I found a picture of him in the Pacific, shirtless, helmeted, and carrying a submachine gun. I had the picture framed and it is on the wall in my office to remind me of what my dad sacrificed. I also had his picture registered at the World War II Memorial in Washington where it can be viewed on the kiosk at the Memorial. At the age of 16 my dad was training to fight a terrible war in which he lost many friends and saw many atrocities. After doing his duty he returned home and raised a family and became a productive citizen. He will be 82 on November 15 and he is still going strong. 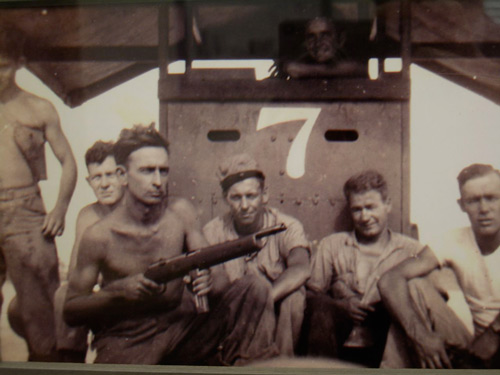 The reticence exhibited by our parents is in stark contrast to the baby boomers they produced. Every facet of our lives has been dissected in print and video and analyzed tirelessly. Getting baby boomers to “open up” has not been a challenge. Sometimes I get weary of our capacity for revealing every little detail of every passage of our lives. Perhaps a bit of self restraint would be a good thing every now then. Writing the history of our generation, such as it is, will not lack for material.

The same cannot be said about our parents. I would encourage every baby boomer and their children to get the stories of their parents and grandparents who survived the war before it is too late. Put some of that loquaciousness to use. We need the stories of the greatest generation to inspire future generations.