“C’est le vie, say the old folks. It goes to show that you never can tell.”

I had lunch with a fellow president today and we began talking about how we got to where we are today. I don’t necessarily mean how we got to be presidents (not many people really plan a career as a president) but more about our journey to college and graduate school. We both remarked at how much more focused students are today. They apply to several colleges and rank them in neat categories of dream schools, first choice schools, and fallback schools. We both just applied to one college. It had more to do with location than anything else. 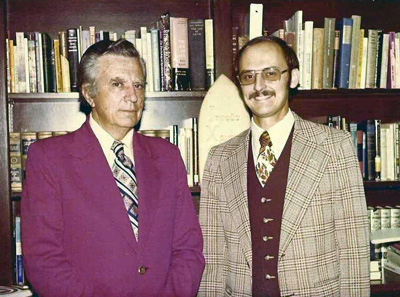 However, as we talked we realized that along the way we both were fortunate to have mentors who seemed to be looking out for us even when we did not fully appreciate or realize what was going on. One such person for me was Dr. John Drakeford. When I arrived at Southwestern Seminary in 1972 Dr. Drakeford was already somewhat of a legend as a psychology professor and author. His Australian brogue as well as his brilliance combined to make him perhaps the most popular speaker on campus and much in demand all over the country. He was a big man with a mane of white hair and bushy white eyebrows. I found him more than a little intimidating. As fate would have it he spoke in chapel my first week at the seminary. The moment I heard him I knew that I wanted to be a psychologist and counselor. Like most young men of that time who went to seminary I had signed up to get my Master of Divinity and I was enrolled in all the classes leading to that end. I went and dropped my preaching class that same day (although the seminary would not let me change my major for another year, a practice I always found interesting but annoying. It seems that they wanted to make sure I had not heard God wrongly).

I also tried to add Dr. Drakeford’s introductory psychology class to my sceudule but the registrar, a rather stern humorless person would not entertain the idea, UNLESS, he said with a knowing chuckle I could get Dr. Drakeford’s permission. Apparently that just did not happen. I set up my ambush in the parking lot and waited for the great man to head for his car, figuring I had a better chance by catching him when he was in a hurry. Sure enough, after awhile, he left the building and I intercepted him, gracefully tripping over a curb stop in the process. He did not stop walking and warily eyed this neophyte seminarian lurching toward him. Maybe there was something pitiful in my demeanor, or maybe he thought I was a stalker and he just needed to get rid of me, but when I explained my plight he said, “I don’t know, it’s a pretty full class, but I guess it would be fine.” Actually I don’t remember exactly what he said but the end result was , “yes.”

That was the beginning of a journey that led me into a career in higher education. Over the next two years I took every class I could from Dr. Drakeford. I volunteered my time in the counseling center and continued working hours there even when I had exceeded my ability to get credit. I attended hours long seminars where doctoral students presented research papers, soaking up whatever I could. I am not sure Dr. Drakeford even knew my name. However, as I neared completion of my master’s degree, one evening after our group sessions Dr. Drakeford called me into his office. He said, “Have you ever thought about entering the doctoral program?” I told him it had crossed my mind. He told me to turn in the paperwork and note that I wanted to be a psychology major. I could not believe how fortunate I was. He could have asked anyone. He carried so much weight with the faculty that during my interview he was the only one that asked me any questions. Later, a faculty member told me that when Dr. Drakeford wanted someone, it was a done deal.

Throughout my doctoral work, Dr. Drakeford gradually invested me with more and more responsibility and when the time came to defend my dissertation, he was 100% supportive. I remember after the defense he and the dean escorted me to the holy of holies, the faculty lounge, my first time to enter it.

I am not sure I ever told Dr. Drakeford how much he meant to me. In those days your major professor was not your pal. He was never “John”, to me but always Dr. Drakeford. Even his wife called him that, at least in our presence. I was always his student and I had deep respect for him. In later years I saw him on occasion on the speaking circuit and he was always very friendly. What he did for me was what he did in life. He did not expect anything but for me to do my best, and his interest and mentoring was just him being his natural self. He was difficult at times and he could be downright intimidating to students but he was the best counselor I have ever known. His belief that people could get better by taking reponsibility for their actions and his devotion to what he called “integrity therapy” was inspirational. Dr. Drakeford passed away last year but he leaves a legion of students that he touched and many lives that he changed.

It just goes to show, you never can tell.