Blame it on Valentine’s Day

Blame it on Valentine’s Day

February 12, 1971 started out pretty much like any other Friday for me. I prepared to meet some classmates for the thirty minute drive to Louisiana Tech where I would attend a couple of classes for my last semester. I had no steady girlfriend and no real prospects. I had a part time job grading papers and working nights at a funeral home, so I actually did not have a very active social life at all. One thing is for certain, when I got out of bed that morning I did not expect to meet the woman who I would marry three months and 17 days later. Blame it on Valentine’s Day.

In 1971, churches, especially in the South, took Valentine’s Day seriously. Almost every one had a sweetheart banquet. Our church had two, one for the adults and one for the youth. At 20 years old I was sort of in between. These affairs always featured decorations, a fine meal, and usually an outside speaker or entertainer. Our youth director was the person responsible and it was his job to turn the gymnasium into a cruise ship, or a Roman coliseum, or in 1971, an old time paddle wheel riverboat. Tickets were sold and these annual events were the major social occasion of the church.

I was often enlisted to help with the entertainment. On this particular year I had put together a group of college friends to sing and play banjos and guitars. We were doing San Francisco Bay Blues, a number popularized by Peter, Paul and Mary and later recorded by Eric Clapton. I had also agreed to be the straight man in a skit put on by some of the deacons.

The real entertainment however was to be brought by a former Miss New Mexico and top ten finalist and talent winner in the Miss America Pageant, Miss Pat Brummett (This was before Ms. became the politically correct designation). This was also in the days when the Miss America Pageant was a big deal, kind of like American Idol is today. I did not know this at the time but Pat had gotten in the pageant because her mother entered her in the Miss Hobbs Pageant which she won. That gave her entry into the Miss New Mexico Pageant which she also won and then it was on to the big one. Those were the only pageants she was ever in. I had seen her picture around the church but had paid little attention to it. In fact, I had procured a date for the Saturday night banquet only because I had to be there anyway. How she came to be there in the first place was rather coincidental. Our pastor had first heard about her from a friend in Texas. He subsequently had invited her to sing at a city wide evangelistic Crusade in Monroe, Louisiana, and then decided she would be perfect for our annual sweetheart banquets; and she was.

The banquet for Friday evening was scheduled to begin around 7 PM. I was just about to go out the door when Dan Flowers, our youth director called me on the phone. He said,” In all the planning I forgot to get someone to go pick up the performer. Could you do that?” I told him sure, but I really was not all that enthusiastic about it. My record with Miss something or others was not very good. I had actually gone to a movie with Miss Louisiana once as a favor (I am not kidding) to my boss. It was awful. She talked the whole time about some football player from LSU that she felt destined to marry. After the evening I felt like calling him and telling him “RUN!” The funny thing is that his name was Casanova.

Anyway I dutifully went to the Howard Johnson’s and knocked on the door to Miss New Mexico’s room and there she was. I am sure my memory has failed me somewhat over the years but if it was not love at first sight, it was about as close as I could get. Understand I was not all that easily smitten so I knew something must be going on. The thing is she did not at any time during the weekend share my enthusiasm for a relationship. In fact, by the next time I called her, she had more or less forgotten who I was. 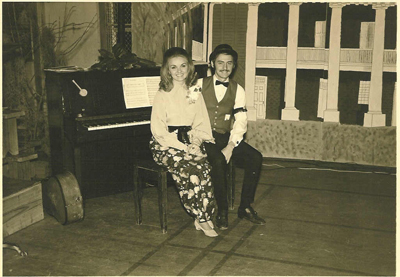 The banquet went well and Pat likes to remember that the youth director gave me five bucks to take her out to eat after the banquet, and I bought her a Coke and kept the rest. That is true but in fairness all she wanted was a Coke so who was I to argue? I cancelled my date for the next evening and with great chivalry offered to provide transportation for her again.

The rest of the story is for another blog. Suffice it to say that I eventually won her over more with persistence than charm. Valentine’s Day will always be special to me because, in my case, it really is when I found my true love.