August Drew Lacey arrived at 2:32 AM (EDT) this morning (March 12), all 9 pounds six ounces and 20.8 inches of him. There were no videos or camera phone pictures, just an excited father on the phone in the wee hours of the morning, “You have a grandson, everyone is fine, and we will talk to you tomorrow.” Call me old fashioned, but I liked it that way.

Unlike his father, who almost did not make it to the hospital, August took his time, about 20 hours. Needless to say, his mother should remind him of that many times in the future, especially around Mother’s Day. I can’t say as I blame him though, the world can be a scary place these days. 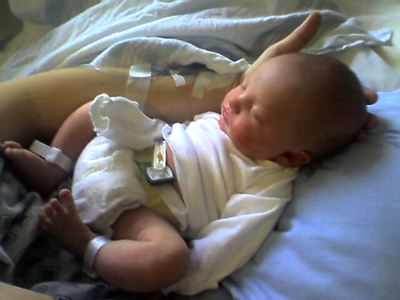 About thirty five years ago Pat and I spent the evening with some expectant friends who would have their second child the next day. We played games and talked until about two in the morning and I remember the mother lamenting the state of the world and wondering about bringing a child into it. I guess all responsible parents think about those things.

I believe that is where grandparents are different. Every grandparent I know has been preparing me for this moment mostly with comments like, “It is not like anything else you have experienced,” and “you are going to love it,” and “be prepared for a whole new level of love and attachment.” I am sure they are right though I am just getting started. . There is one thing I know though; a distinguishing characteristic of grandparents is that they are full of hope. You don’t find them sitting around talking about whether or not their kids should bring another human being into the world. Of course they should! It is the hope of the world! Whatever the mistakes our generation and our children’s generation have made, they can overcome them. Sure there are problems and challenges but if these kids are half as smart as their grandparents think they are, then the world is in good hands.

I look forward to meeting August. I am sure we will spoil him as will his Aunt Brenna and Great Grandfather Lacey and Great Uncle Todd. I’ll give him a couple of years before I build him a fly rod and take him backpacking. I am sure his grandmother will watch closely for his musical ability and training. He will have a loving family but most of all one that sees great hope for the future in his generation.